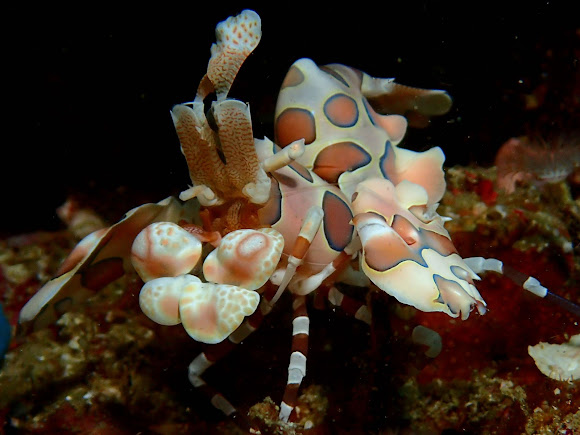 Hymenocera picta, commonly known as the harlequin shrimp, is a species of saltwater shrimp found at coral reefs in the tropical Indian and Pacific oceans. It is usually considered the only species in the genus Hymenocera, but some split it into two species: H. picta from the central and east Pacific where the spots are deep pinkish-purple with a yellow edge, and H. elegans from the Indian Ocean and west Pacific where the spots are more brownish and have a blue edge. They reach about 5 centimetres (2.0 in) in length, live in pairs and feed exclusively on starfish, including crown-of-thorns starfish. It does seem to prefer smaller, more sedentary starfish, but as these generally are not sufficiently numerous for its needs, it commonly will attack Acanthaster, both reducing its consumption of coral while under attack, and killing it within a few days

Found at around 18 meters depth in a small crevice of a coral rock, which they use as their 'home'.