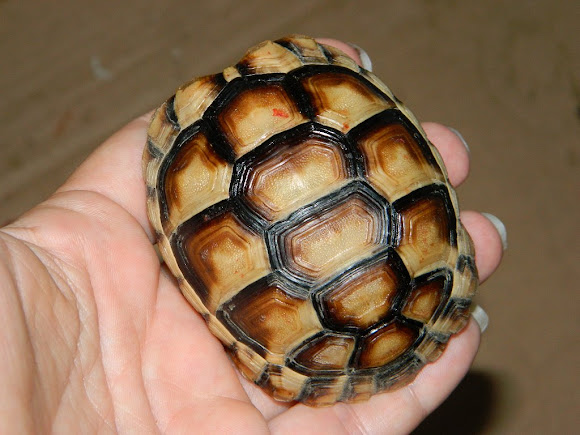 A young Marginated tortoise (probably about 3-4 years old) which was spotted and rescued as it was trying to cross the Volos city ring road. It was spotted by my husband walking our dog, he took the baby with him, and brought it home. We kept him until later that evening, fed it with an organic tomato from our veggie garden, and we released it back in the wild, in a much safer place, in an open and very large olive grove where there are many turtles of his kind. The marginated tortoise (Testudo marginata) is a species of tortoise found in Greece, Italy and the Balkans in southern Europe. It is the largest European tortoise, reaching a weight of up to 5 kg and a length of 35 cm . Its shell is oblong and has a notable thickness around the middle of the body. The posterior end of the shell has a saw-like formation, flanged outward like a bell. The carapaces of adult specimens are almost completely black, with yellow highlights. The front sides of the limbs are covered with large scales. The tail is notable for a lengthwise marking and for an undivided carapace over the tail. The marginated tortoise is herbivorous, and hibernates for the winter. The species is protected by the Greek law. Spotted in the outskirts of Volos city, Greece.