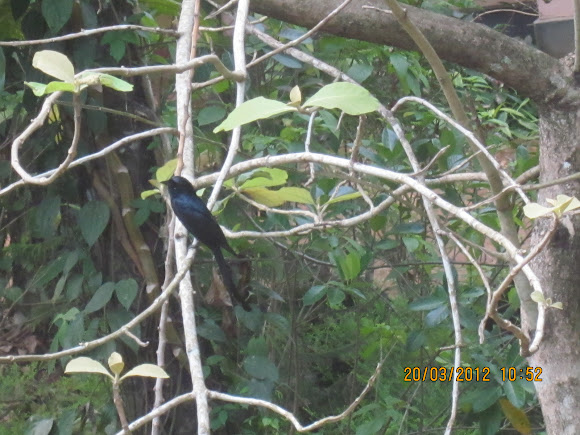 This bird is glossy black with a wide fork to the tail. Adults usually have a small white spot at the base of the gape. The iris is dark brown (not crimson as in the similar Ashy Drongo). The sexes cannot be told apart in the field. Juveniles are brownish and may have some white barring or speckling towards the belly and vent, and can be mistaken for the White-bellied Drongo. First-year birds have white tips to the feathers of the belly, while second-years have these white-tipped feathers restricted to the vent. They are aggressive and fearless birds, and although only 28–cm (11–in) in length, they will attack much larger species that enter their nesting territory, including crows and birds of prey. This behaviour led to their former name of King Crow. They fly with strong flaps of the wing and are capable of fast manoeuvres that enable them to capture flying insects. With short legs, they sit upright on thorny bushes, bare perches or electricity wires. They may also perch on grazing animals. They are capable of producing a wide range of calls but a common call is a two note tee-hee call resembling that of the Shikra (Accipiter badius).

The Black Drongo is found predominantly in open country and usually perches and hunts close to the ground. They are mostly aerial predators of insects but also glean from the ground or off vegetation. They are found as summer visitors to northeastern Afghanistan and northern Pakistan but are residents from the Indus Valley until Bangladesh and into India and Sri Lanka.Some populations show seasonal movementsthat are poorly understood. The Black Drongo can be found in savannas, fields, and urban habitats.

Thank you! I've edited the spotting! :)