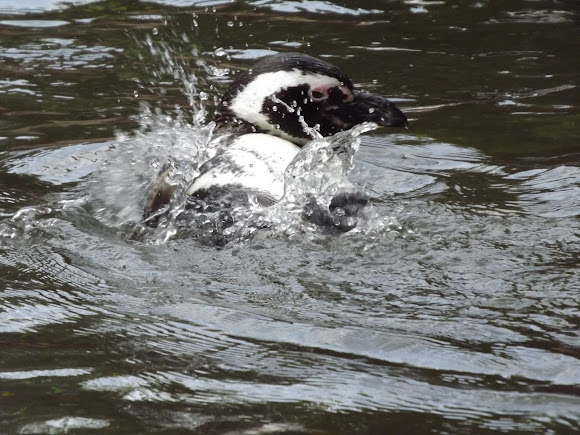 Magellanic Penguins are medium-sized penguins which grow to be 61–76 cm (24–30 in) tall and weigh between 2.7 kg and 6.5 kg (5.9-14.3 lbs). The males are larger than the females, and the weight of both drops while the parents nurture their young. Adults have black backs and white abdomens. There are two black bands between the head and the breast, with the lower band shaped in an inverted horseshoe. The head is black with a broad white border that runs from behind the eye, around the black ear-coverts and chin, and joins at the throat. Chicks and younger penguins have grey-blue backs, with a more faded grey-blue colour on their chest. Magellanic Penguins can live up to 25 years in the wild, but as much as 30 years in captivity. Young birds usually have a blotched pattern on their feet, which fades as they age. By the time these birds reach about ten years of age, their feet usually become all black.Like other species of penguins, the Magellanic Penguin has very rigid wings used to "fly" or cruise under water.

Millions of these penguins still live on the coasts of Argentina and Chile, but the species is classified as a "threatened species", primarily due to the vulnerability of large breeding colonies to oil spills, which kill 20,000 adults and 22,000 juveniles every year off the coast of Argentina. To help the fight against the oil spills, zoo representatives from all over the world come and adopt the hatchlings, and breed them there. The decline of fish populations is also responsible, as well as predators such as sea lions and giant petrels, which prey on the chicks

Spotted at the "Aquatic Bird House" at the Bronx Zoo.