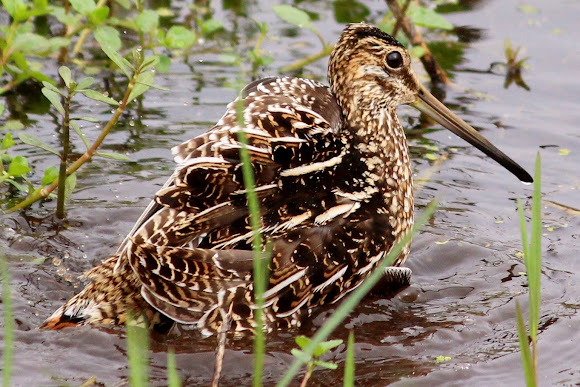 From Wikipedia: Wilson's snipe is a small, stocky shorebird. This species was considered to be a subspecies of the common snipe (G. gallinago) until 2003 when it was given its own species status, though not all authorities recognized this immediately. Wilson's snipe differs from the latter species in having a narrower white trailing edge to the wings, and eight pairs of tail feathers instead of the typical seven of the common snipe. Its common name commemorates the American ornithologist Alexander Wilson.

A first for me! This was the second day in a row that I saw this little snipe bathing in this spot, but I was unable to photograph it on the first day. Such a strange looking little bird, but it was fun to watch.

They are hard to get photos of! Congratulations!