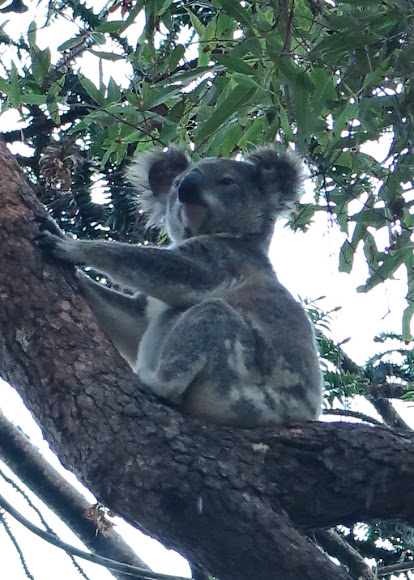 The koala is an arboreal herbivorous marsupial native to Australia. It is the only extant representative of the family Phascolarctidae, and its closest living relative is the wombat. Such an amazing animal that I see so rarely. And koalas are not bears! This is the first "wild" koala I have seen in over 20 years, and it certainly hasn't been for the lack of looking. There were actually two in this area, and this particular fellow was very active.

Spotted in a native eucalypt in a small bayside village, but very close to an extensive bushland area. Certainly enough trees in the area for them to move around easily.

It was raining and the light was awful, and the koala was high up in the tree. Not the best pics, but hey, it's a wild koala, and it was spotted only a few minutes after I disembarked the ferry. When I'm in the car driving around Brisbane, I'm always on the lookout for koalas, but I have to remind myself to keep my eyes on the road and not on the trees. No driving involved to spot this fellow.

I was thrilled, Maria. Even more so because he wasn't fast asleep. I saw him again on my departure and he was climbing out towards the outer branches looking for fresh leaves.

How cool that you get to see this animal in the wild!

Thanks. I think there are still large pockets of them, but particularly in urban areas their numbers have dwindled. Habitat loss (because of people) is probably the biggest offender. A couple of my friends have koalas visiting their properties in Brisbane, so I reckon they're the lucky ones. I was thrilled to see this guy.

Oh what good news that they are still wild. When I was in Queensland people told me there were hardly any wild Koala's left. You are soo lucky! Lovely pictures even if they are a bit dark.