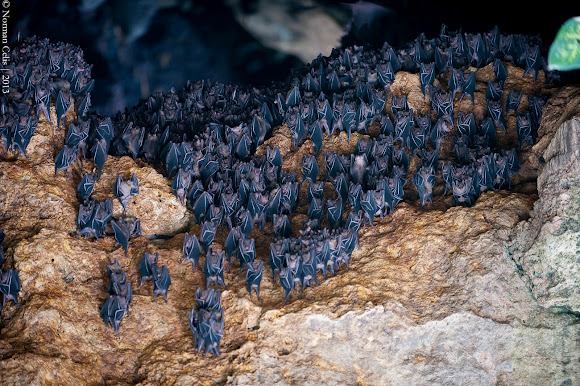 The Monfort Bat Sanctuary is home to 1.8 million Geoffroy’s Rousette fruit bats (Rousettus amplexicaudatus) – the largest known colony of the species in the world. The bats all live in a single cave – guests aren’t allowed to enter, but they can peer over bamboo railings into any of five openings where the seething masses of sleeping fruit bats can be seen coating the cave walls. The bats have made their home in this Samal Island cave for untold generations. They used to roost all around the island until continuing human encroachment drove the flying mammals to seek refuge on the Monfort farm. Today, this Samal Island bat sanctuary shows no signs of slowing down. A recent cave-mapping expedition found that the female bats were almost continuously pregnant, a departure from the bats’ usual seasonal gestation habits. This, among other unusual discoveries, has led current proprietor Norma Monfort to team up with scientific teams from all around the world to transform her 57-acre farm into a serious foundation for the preservation of the Geoffroy’s Rousette.

Location of Monfort Bat Sanctuary The Monfort bat sanctuary is located in Barangay Tambo in Babak District on the “Island Garden City of Samal” (Samal Island), coordinates 7°09'55.10"N, 125°41'29.63"E (approximate). The property has belonged to the Monfort family for generations; this unbroken ownership over the years may have been responsible for the property becoming a bat sanctuary. Other bat habitats around the island were disturbed or destroyed by human encroachment, leading their residents to seek shelter in the only inviolable part of the island: the private property owned by the Monforts. The current owner, Norma Monfort, has made every effort to balance the bats’ well-being with the need for scientific study and tourist revenue. In the past, Ms. Monfort didn’t charge admission for visitors. This changed when a Filipino TV station featured the cave on one of their shows. The resulting publicity was both good and bad for the bats: “The Department of Tourism asked me if I would allow the film crew inside,” recalls Ms. Monfort. “Afterward, when I had the cave inspected, so many baby bats had died. When the film crew was there, the bats were disturbed, and the baby bats fell to the floor of the cave.” Monfort Bats’ Strange Behavior The fruit bats in the Monfort sanctuary don’t behave like other Geoffroy’s Rousettes. For starters, this species of bat normally give birth twice a year within a seasonal pattern, once between March and April and the other between August and September. (source) Not the Monfort bats – a cave-mapping expedition conducted in January 2011 found a large number of pregnant bats. “They’re pregnant all year round. And they’re still mating!” exclaims Ms. Monfort. “And then the males are very aggressive with the babies, they’ll kill the babies so the mothers will be in heat again.” The bats also behave strangely when they’re out of the cave. Some bats will take a dip in the nearby sea, which is “a very unusual behavior” as Ms. Monfort tells it. Another strange behavior: the male bats, coming back tipsy on fermented fruit, will linger around the nearby trees before entering the cave. The scenic emergence of the bats from the caves at dusk, while spectacular, is not open to the public at this time – Ms. Monfort, with her limited resources, cannot afford to have a nighttime guard on hand to manage any spectators after dark.