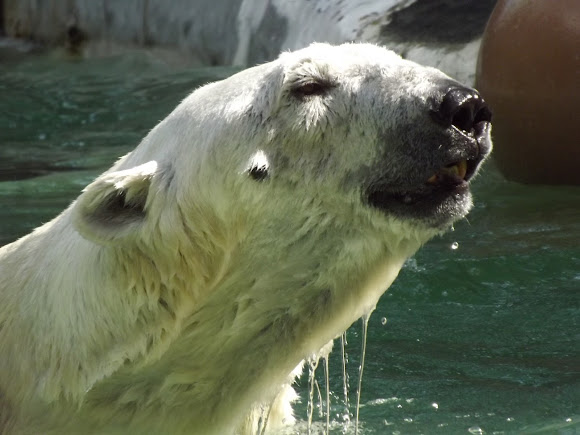 The polar bear is the largest terrestrial carnivore, being more than twice as big as the Siberian tiger. It shares this title with the Kodiak Bear. Adult males weigh 350–680 kg (770–1500 lbs) and measure 2.4–3 m (7.9–9.8 ft) in length.[38] Adult females are roughly half the size of males and normally weigh 150–250 kg (330–550 lb), measuring 1.8–2.4 metres (5.9–7.9 ft) in length. When pregnant, however, they can weigh as much as 500 kg (1,100 lb). The polar bear is among the most sexually dimorphic of mammals, surpassed only by the pinnipeds. The largest polar bear on record, reportedly weighing 1,002 kg (2,210 lb), was a male shot at Kotzebue Sound in northwestern Alaska in 1960. The shoulder height of the polar bear is 130–160 cm (51–63 in). Compared with its closest relative, the brown bear, the polar bear has a more elongated body build and a longer skull and nose.[24] As predicted by Allen's rule for a northerly animal, the legs are stocky and the ears and tail are small. However, the feet are very large to distribute load when walking on snow or thin ice and to provide propulsion when swimming; they may measure 30 cm (12 in) across in an adult. The pads of the paws are covered with small, soft papillae (dermal bumps) which provide traction on the ice. The polar bear's claws are short and stocky compared to those of the brown bear, perhaps to serve the former's need to grip heavy prey and ice. The claws are deeply scooped on the underside to assist in digging in the ice of the natural habitat. Research of injury patterns in polar bear forelimbs found injuries to the right forelimb to be more frequent than those to the left, suggesting, perhaps, right-handedness. Unlike the brown bear, polar bears in captivity are rarely overweight or particularly large, possibly as a reaction to the warm conditions of most zoos.

The polar bear is often regarded as a marine mammal because it spends many months of the year at sea. Its preferred habitat is the annual sea ice covering the waters over the continental shelf and the Arctic inter-island archipelagos. These areas, known as the "Arctic ring of life", have high biological productivity in comparison to the deep waters of the high Arctic.The polar bear tends to frequent areas where sea ice meets water, such as polynyas and leads (temporary stretches of open water in Arctic ice), to hunt the seals that make up most of its diet. Polar bears are therefore found primarily along the perimeter of the polar ice pack, rather than in the Polar Basin close to the North Pole where the density of seals is low.

Spotted at the "Bears" exhibit at the Bronx Zoo.