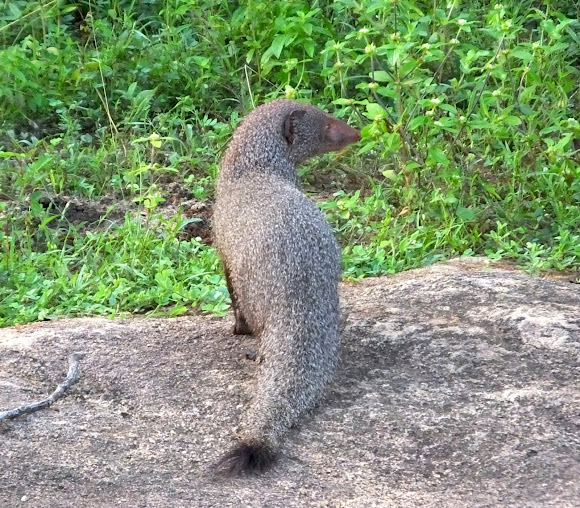 Ruddy Mongoose have a body length between 39 and 47 cm, a tail length between 33 and 36 cm. They are dark brown in colour with black and white speckling throughout their coat. Around their head and shoulders their coat has a reddish tint and they have a black tip on their tail.

Yala National Park, Sri Lanka. Yala combines a strict nature reserve with a national park. Divided into 5 blocks, the park has a protected area of nearly 130,000 hectares of land consisting of light forests, scrubs, grasslands, tanks and lagoons. One block is currently opened to the public. Situated in Sri Lanka’s south-east hugging the panoramic Indian Ocean, Yala was designated a wildlife sanctuary in 1900 and was designated a national park in 1938. Ironically, the park was initially used as a hunting ground for the elite under British rule. Yala is home to 44 varieties of mammal and 215 bird species.

After having lived with Cobras and being told the story of Rikki Tikki Tavi http://en.wikipedia.org/wiki/Rikki-Tikki..., I always wanted to see a Mongoose. Today was my lucky day. We saw 2 at different times. This one was close enough (and stood still for a bit ) to take some shots of.