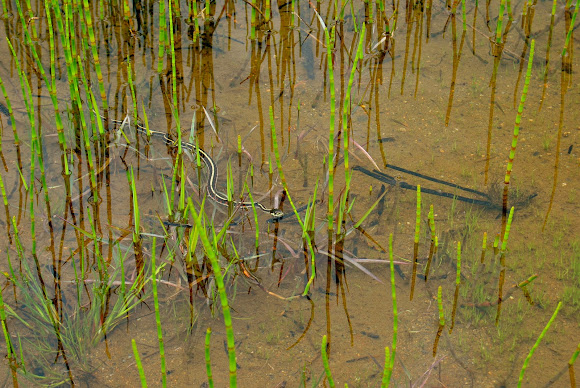 Adults range in size from 46 cm to 1.3 m. Snakes in northern locations tend to be larger on average than their more southern counterparts. While markings vary between the 3 subspecies, all of these snakes have a black to greyish green body, a large, distinct head, and a bright yellow to greenish yellow stripe down the back. In addition, they occasionally sport red side stripes or red spots or blotches that combine with their other markings to form unique and beautiful patterns.

The habitat of the garter snake ranges from forests, fields, and prairies to streams, wetlands, meadows, marshes, and ponds, and it is often found near water. It is a semi-aquatic animal like most snakes. It is found at altitudes from sea level to mountain locations. Their diet consists mainly of amphibians and earthworms, but also fish, small birds, and rodents. Garter snakes are effective at catching fast-moving creatures like fish and tadpoles.