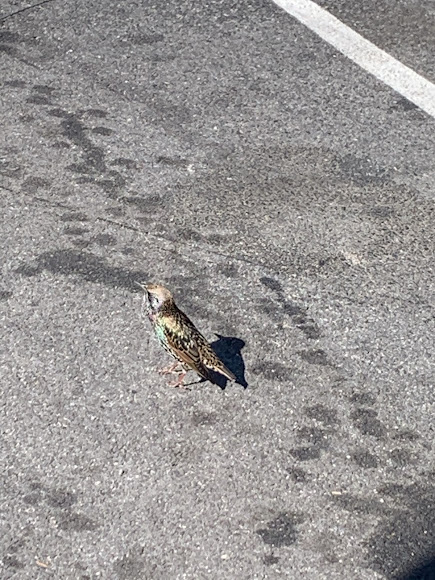 First brought to North America by Shakespeare enthusiasts in the nineteenth century, European Starlings are now among the continent’s most numerous songbirds. They are stocky black birds with short tails, triangular wings, and long, pointed bills. Though they’re sometimes resented for their abundance and aggressiveness, they’re still dazzling birds when you get a good look. Covered in white spots during winter, they turn dark and glossy in summer. For much of the year, they wheel through the sky and mob lawns in big, noisy flocks.

Starlings are common around cities and towns. Look in lawns, city parks and squares, and fields. They’ll be working their way across the grass, often moving in a slight zig-zag line and seeming to hurry as they stab their bills into the ground every step or two. In the countryside you’re more likely to see starlings perched in groups at the tops of trees or flying over fields or roads in tight flocks.

Starlings are great vocal mimics: individuals can learn the calls of up to 20 different species. Birds whose songs starlings often copy include the Eastern Wood-Pewee, Killdeer, meadowlarks, Northern Bobwhite, Wood Thrush, Red-tailed Hawk, American Robin, Northern Flicker, and many others.

This is a starling.