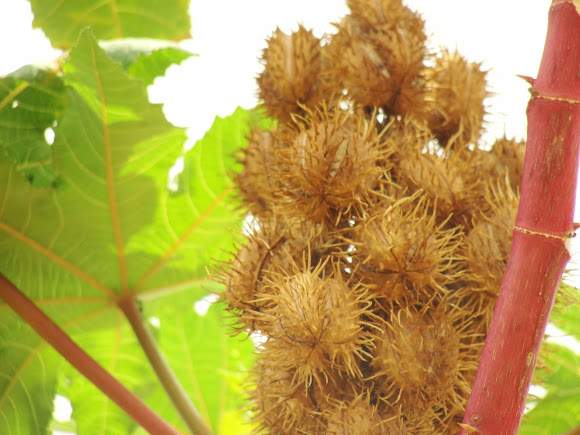 The castor bean plant, an erect, tropical shrub or small tree, grows up to 30 feet tall. As an annual in the cooler zones, it grows up to 15' tall. It is a very fast growing plant. The joints of the hollow stem, stalks and leaves are reddish to purple. The 6 - 11 lobed, palmate leaves with uneven serrated edge, are also red or colored and often have a blue-gray bloom. There is also a green variety. The flat seeds are in a seedpod that explodes when ripen. All the top of the stem and stalks are the inflorescence with the male - and female flowers. The female flowers are the fuzzy red structures at the top of the flower spike with the male flowers positioned on the lower half, and have conspicuous yellow anthers The oblong fruit turns brown when ripe. In each seed pod (a capsule) there are three seeds. The seeds of castor bean or castor oil plant, are very poisonous to people, animals and insects; just one milligram of ricin (one of the main toxic proteins in the plant) can kill an adult. The castor oil is extracted from the beans, which is used for medicinal purposes. Commercially prepared castor oil contains none of the toxin. Medicinal uses: In Manipur, leaves are warmed, crushed and applied to annus as a remedy for bleeding piles. Seed oil is purgative. Leaf-paste is used as poultice on sores, gout or rheumatic swellings. Decoction of root is given in lumbago. For lactation, leaves of the plant are heated and applied to a woman's breasts to improve secretion of milk.

Toxicity Seeds Main article: Ricin The toxicity of raw castor beans due to the presence of ricin is well-known. Although the lethal dose in adults is considered to be four to eight seeds, reports of actual poisoning are relatively rare. According to the 2007 edition of the Guinness Book of World Records, this plant is the most poisonous in the world. Despite this, suicides involving ingestion of castor beans are unheard of in countries like India where castor grows abundantly on the roadsides, which may be attributed to the rather painful and unpleasant symptoms of overdosing on ricin, which can include nausea, diarrhea, tachycardia, hypotension and seizures persisting for up to a week. However, it is well known that the poison can be extracted from castor by concentrating it with a fairly complicated process similar to that used for extracting cyanide from almonds. If ingested, symptoms may be delayed by up to 36 hours but commonly begin within 2–4 hours. These include a burning sensation in mouth and throat, abdominal pain, purging and bloody diarrhoea. Within several days there is severe dehydration, a drop in blood pressure and a decrease in urine. Unless treated, death can be expected to occur within 3–5 days, however in most cases a full recovery can be made. Poisoning occurs when animals, including humans, ingest broken seeds or break the seed by chewing: intact seeds may pass through the digestive tract without releasing the toxin. Toxicity varies among animal species: four seeds will kill a rabbit, five a sheep, six an ox or horse, seven a pig, and eleven a dog. Ducks have shown incredible resistance to the seeds: it takes an average of 80 to kill them. The toxin provides the castor oil plant with some degree of natural protection from insect pests such as aphids. In fact, ricin has been investigated for its potential use as an insecticide. The castor oil plant is also the source for undecylenic acid, a natural fungicide. Commercially available cold-pressed castor oil is not toxic to humans in normal doses, either internal or externally.