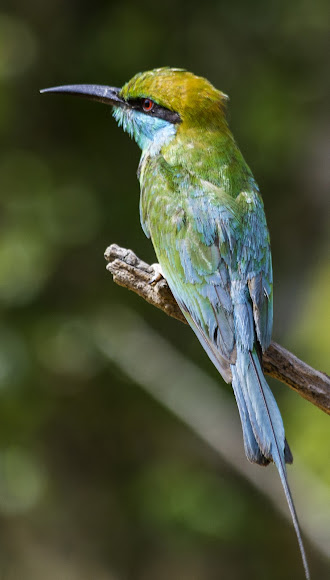 The green bee-eater (Merops orientalis), also known as little green bee-eater, is a near passerine bird in the bee-eater family. It is resident but prone to seasonal movements and is found widely distributed across sub-Saharan Africa from Senegal and the Gambia to Ethiopia, the Nile valley, western Arabia and Asia through India to Vietnam. They are mainly insect eaters and they are found in grassland, thin scrub and forest often quite far from water. Several regional plumage variations are known and several subspecies have been named. Like other bee-eaters, this species is a richly coloured, slender bird. It is about 9 inches (16–18 cm) long with about 2 inches made up by the elongated central tail-feathers. The sexes are not visually distinguishable. The entire plumage is bright green and tinged with blue especially on the chin and throat. The crown and upper back are tinged with golden rufous. The flight feathers are rufous washed with green and tipped with blackish. A fine black line runs in front of and behind the eye. The iris is crimson and the bill is black while the legs are dark grey. The feet are weak with the three toes joined at the base. Southeast Asian birds have rufous crown and face, and green underparts, whereas Arabian beludschicus has a green crown, blue face and bluish underparts. The wings are green and the beak is black. The elongated tail feathers are absent in juveniles. Sexes are alike. The calls is a nasal trill tree-tree-tree-tree, usually given in flight