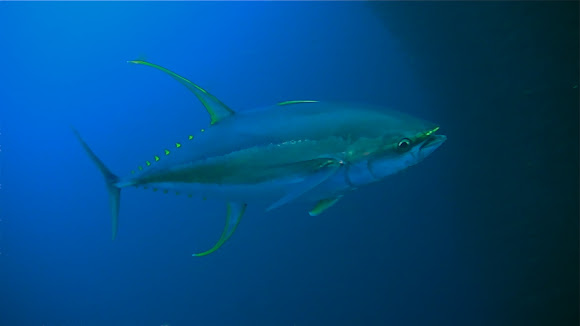 Yellowfin tuna are epipelagic fish that inhabit the mixed surface layer of the ocean above the thermocline. Sonic tracking has found that although yellowfin tuna, unlike the related bigeye tuna, mostly range in the top 100 m (330 ft) of the water column and penetrate the thermocline relatively infrequently, they are capable of diving to considerable depths. An individual tagged in the Indian Ocean with an archival tag spent 85% of its time in depths shallower than 75 m (246 ft) but was recorded as having made three dives to 578 m, 982 m and 1,160 m (3,810 ft).

This spotting was in Pescador Island, Moal-Boal, Cebu. At that time, there was a massive shoal of Sardines by the millions. We went there to enjoy the Sardines and was not expecting to see this Yellow Fin Tunas as they are not common there. Dog Tooth Tunas are more common but smaller. During this dive, there were a small school of this Yellow Fins Tunas, hunting among the Sardine. The dark shadow on the right of the picture is actually the shoal of Sardines, they are packed tightly together as the Tunas surrounds them and then go for the kill. Amazing encounters during this dive.

I hope you get certified as a Scuba Diver, @Desmond and get to explore the marine life and takes great pictures of them :)

Save the Tuna! Tuna are almost extinct!

Thanks, @Joshua.
You will have to get certified as a Scuba Diver first, if you are not one yet.
And after that, you will be amazed with the underwater life, they can be very colorful!

Nice fish! I would love to do some underwater photography sometime!