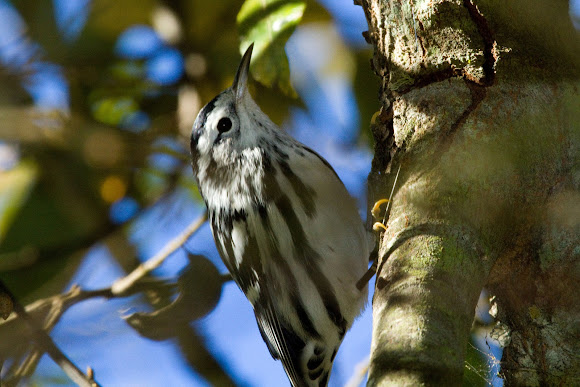 This species is 14 cm (6 in) long and weighs 11 g (0.39 oz).[3] The summer male Black-and-white Warbler is boldly streaked in black and white, and the bird has been described as a flying humbug. There are two white wing bars. Female and juvenile plumages are similar, but duller and less streaked.

The Black-and-white Warbler (Mniotilta varia) is a species of New World warbler, the only member of its genus, Mniotilta.[2] It breeds in northern and eastern North America from the Northwest Territory and Newfoundland and Labrador, Canada to Florida. This species is migratory, wintering in Florida, Central America and the West Indies down to Peru.

This bird is wintering in the San Francisco Botanical Garden

A beautiful picture of this black and white warbler.