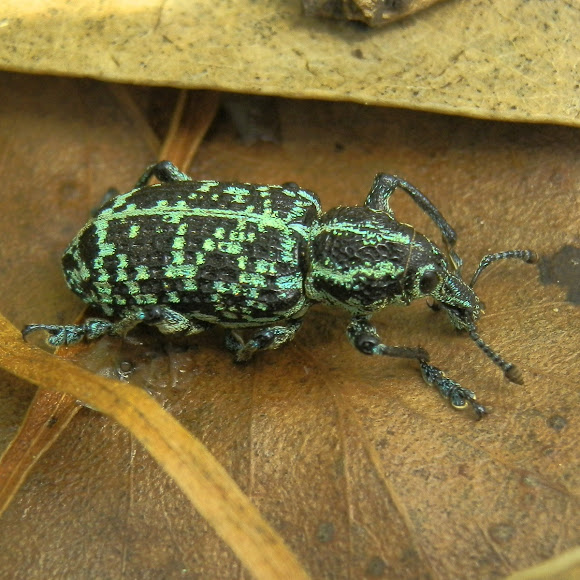 This is a very attractive 25 mm long weevil with dark head, thorax and elytra. Both elytra and thorax showed shallow pitting -on the elytra the pitting was slightly hexagonal in shape whereas on the thorax it was irregular (pic 4). Some of the pits were covered by dense short pale setae which appeared to be iridescent (pic 4). This gave the beetle a beautiful blue-green colour. Strangely, the colouring was more vivid in shade. The underside of the beetle also had setae which reflected similar colours.

Spotted on an acacia in a national park

We spotted three of these in the same area, two of which were on the same shrub.
The larvae of these weevils feed on acacia root while the adults feed on foliage.
The beetle is so named because it was collected at Botany Bay (Sydney) during Cook's voyage to Australia. It also happens to be one of the first Australian insects (collected in 1770) to be described scientifically.
Family: Curculionidae

Great picture! What an amazing insect

Very nice series Leuba,congrats and thanks for sharing

Interesting info thanks Vinny. I must have a good read about it. I'm getting the impression most of our local acacia are non-endemics.

Both species of Acacia appear to be a long way from home, suggesting your Weevil is like you say, not to fussy. Nice one :)

Thanks Vinny, I think the two weevils I saw were on Acacia cognata - very soft and feathery - could not capture it very well in the photos. I don't believe these weevils are fussy about the type of acacia. The third one we saw was on Acacia pulchella (Prickly Moses).

Amazing info Leuba. Not sure if they prefer particular Acacia's but the one pictured looks like A. leprosa.

Thanks everyone. Very exciting find for me. I love their faces.

Awesome series Leuba! I absolutely love weevils and don't feel they get the credit deserved in the beetle world.

I never actually thought of Weevils as Beetles! You learn a little every day :-) wonderful pictures!

Let us know how it goes please Martin. (and I thought it was mould)

And a very complete description too, as always.
I sometimes see them in numbers at higher altitudes.
I wonder the benefits of speckled elytra and ponder how they might look through the foliage of black wattle with only small spots of blue sky visible. Hmmm... might work.