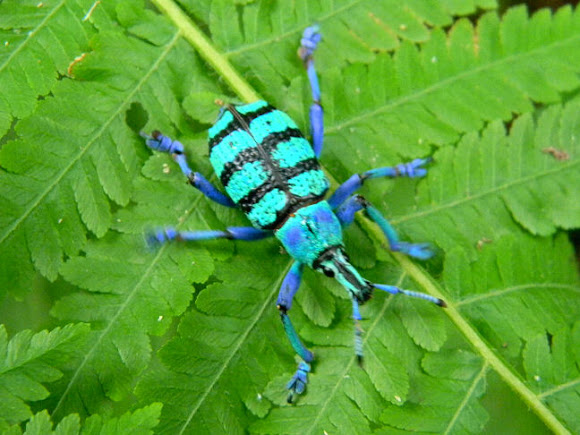 Another of these spectacularly coloured weevils of the genus Eupholus. The ID is based on the expert opinion which was used to name the previous spotting < http://www.projectnoah.org/spottings/797... > The colour may serve as a warning (aposematic coloration) to predators that they are distasteful (as they may feed on leaves which contain chemicals which are toxic to other animals). Eupholus species occur in New Guinea and adjacent islands. < http://www.papua-insects.nl/insect%20ord... >

Location pin is general. I went back to the same area where I had seen this species in December 2011 with finding this incredible, or similar weevil, in mind. Although I did succeed, there were noticeably fewer around. (I saw only 2 in two days). I don't know if seasonality affects (apparent) population. The two I found were not sitting still either, like my previous subject!

beautiful colors for a weevil !!

Thanks very much, Yes yours is very cool too! The color on "mine" is even more pronounced in the earlier spotting (link in description :-)

It's amazing the brilliance of the color in their legs! I photographed a very different one in Colombia (http://www.projectnoah.org/spottings/115...) that also had amazingly colored legs, although yours are more brilliant. (Not to downplay the amazing color of the the body.
Great find!

Thanks very much António. Thrilling to see it again!