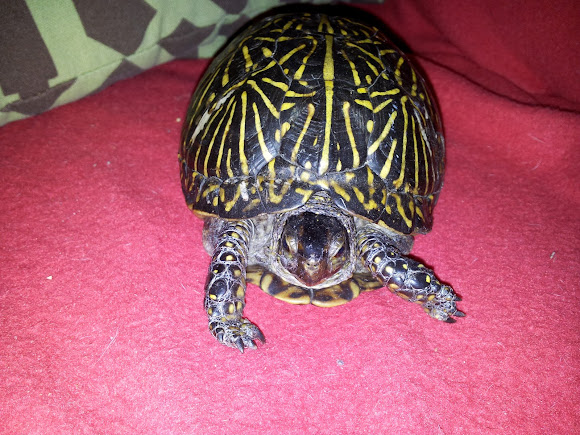 The Ornate Box Turtle is one of two turtle species on the Great Plains that are terrestrial. The other land-dweller is its close cousin the Eastern Box Turtle (Terrapene carolina), whose range covers most of the eastern United States and includes the tallgrass prairie from Kansas to Texas. The Eastern Box Turtle's lower shell is olive drab in color, which readily distinguishes it from the complicated color pattern of the Ornate's.

In autumn the box turtle will seek out a place to bury itself for hibernation. Using their stout claws, they dig themselves into the earth and prepare to shut down for the season. Often they only get a few inches below the ground surface, but that is enough apparently to get them through the cold prairie winter. The Ornate Box Turtle may be found from South Dakota to southern Arizona and the Rio Grande valley. The Mississippi River generally marks the eastern boundary of its range. It prefers prairies and pastures to woodlands. The Ornate Box Turtle is active from April through October. It may spend its entire life within an area of only a few acres. It begins its day by basking in the sun. After getting warmed up, it goes looking for food. A box turtle on the hunt is fun to observe. They have an earnest determination that is quite admirable. It likes to eat insects, spiders, worms and some vegetarian fare such as berries. In cow pastures, box turtles may often be found around dung piles looking for beetles!

Ornate box turtles are among the most sensitive and difficult of North American species to maintain successfully. We do not recommend this species for beginners. They inhabit a variety of environments, from grassy plains to damp forest floors. They make extensive use of burrows and microclimates. Glass aquarium tanks are categorically not appropriate for this species. They do best in carefully landscaped outdoor enclosures, or in large, indoor terraria with adequate substrate depth. For a substrate, we recommend light peat-based potting compost mixed with damp sphagnum moss. This should be at least 3-4" (75-100 mm) deep. It is imperative that Ornate box turtles are not allowed to become dehydrated - so dry tanks with excessive heat are a major source of problems. Ensure that box turtle habitats are provided with plenty of shade, have a shallow 'soaking' tray of fresh, clean water permanently available, and that temperatures are maintained from 80-85 ºF in one area to approximately 70 ºF in another. On no account over-heat or allow dehydration to occur. Spray the area regularly and ensure that the substrate retains adequate humidity at all times. Environmental problems usually manifest as swollen and infected eyes, ear abscesses and kidney diseases. As virtually all box turtles sold are wild-caught, parasitic diseases are also very common. Look out for Bot fly larvae infections, flagellate infestations and nematodes (intestinal 'worms'). All will require treatment from a specialist veterinarian. Ornate box turtles are highly carnivorous. Provide calcium-dusted crickets, mealworms, waxworms and earthworms on a regular basis. Pinkie mice are also very important. Over-ripe fruits and green-leaf salads are also essential.