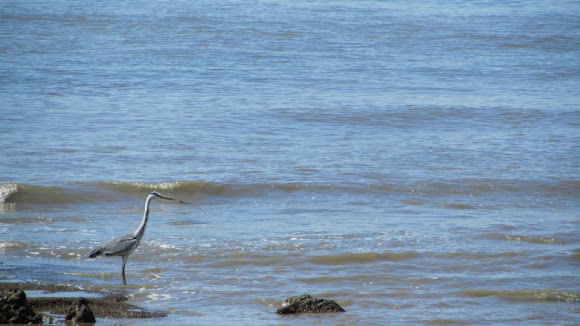 It is a large bird, standing up to 100 cm (39 in) tall and measuring 84–102 cm (33–40 in) long with a 155–195 cm (61–77 in) wingspan.[2] The body weight can range from 1.02–2.08 kg (2.2–4.6 lb).[3] Its plumage is largely grey above, and off-white below. Adults have a white head with a broad black supercilium and slender crest, while immatures have a dull grey head. It has a powerful, pinkish-yellow bill, which is brighter in breeding adults. It has a slow flight, with its long neck retracted (S-shaped). This is characteristic of herons and bitterns, and distinguishes them from storks, cranes and spoonbills, which extend their necks. The call is a loud croaking "fraaank". The Australian White-faced Heron is often incorrectly called a Grey Heron. In Ireland the grey heron is often colloquially called a "crane".

Can usually be found in freshwater bodies with little depth and also in sea coasts. Often sharing the habitat of storks.

A little nature in the urban scenery :) Spotted in the Tagus river, Lisbon " Praça do Comercio"

Thanks AntónioGinjaGinja! Cache from Geocaching? :p