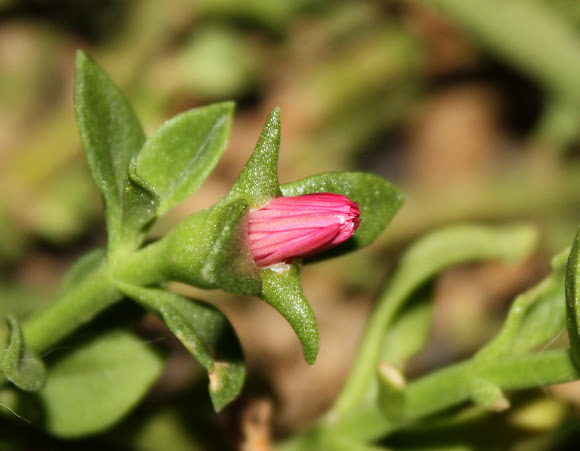 Carpobrotus edulis is a creeping, mat-forming succulent species and member of the Stone Plant family Aizoaceae, one of about 30 species in the genus Carpobrotus. Carpobrotus edulis is easily confused with its close relative, the more diminutive and less aggressive Carpobrotus chilensis (sea fig), and the two species hybridize readily throughout their ranges in California. The large 2.5-to-6-inch-diameter (63 to 150 mm) flowers of C. edulis are yellow or light pink, whereas the smaller, 1.5-to-2.5-inch-diameter (38 to 63 mm) C. chilensis flowers are deep magenta

Carpobrotus edulis is native to South Africa. It is also known as ice plant, Highway Ice Plant, Pigface or Hottentot Fig and in South Africa as the Sour Fig (Suurvy; earlier: Hotnosvy), on account of its edible fruit. It was previously classified in genus Mesembryanthemum and is sometimes referred to by this name. Carpobrotus edulis has naturalised in many other regions throughout the world, and is an invasive species in several parts, notably Australia, California and the Mediterranean, all of which share a similar climate. The ice plant has escaped from cultivation and has become an invasive species. The ice plant poses a serious ecological problem, forming vast monospecific zones, lowering biodiversity, and competing directly with several threatened or endangered plant species for nutrients, water, light, and space.

Thanks Emma for you inteligent comment and for the id,these photos where taken with the new camera that i talk yesterday nigth,give another detail,i have to take more photos with her :)

Beautiful shade of red and a great combination of red and green.I like the way the slender petals are piled together in the bud.