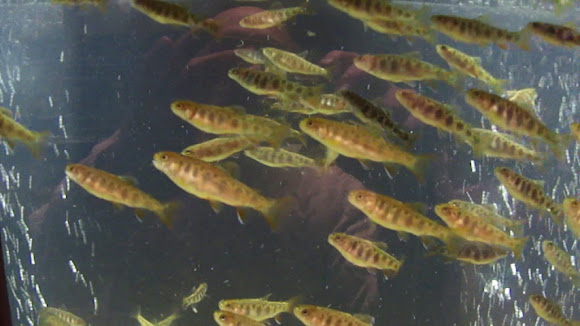 The brook trout (Salvelinus fontinalis), sometimes called the eastern brook trout, is a species of fish in the salmon family of order Salmoniformes. In many parts of its range, it is known as the speckled trout or squaretail. A potamodromous population in Lake Superior is known as coaster trout or, simply, as coasters. Though commonly called a trout, the brook trout is actually a char, along with lake trout, bull trout, Dolly Varden and the Arctic char. The brook trout is the state fish for eight states: Michigan, New Hampshire, New Jersey, New York, Pennsylvania, Vermont, Virginia and West Virginia

Hi Mark. Actually, they are in a 50 gallon tank in my classroom. We raise them from eggs provided by the Fish Commission and then stock them in the spring. It's a great classroom activity. Thanks for the comment!

Nice info. Are they in a tube?