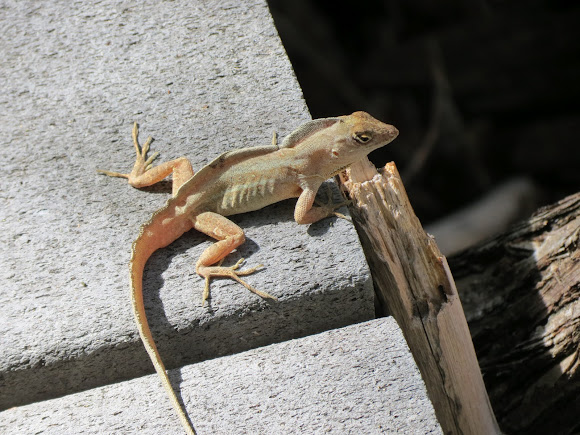 The brown anole is native to Cuba and the Bahamas, and it was first observed in the Florida Keys in 1887. Peripheral populations continue to be established in the panhandle and northern peninsular Florida, Georgia, Louisiana, and Texas via motor vehicles or transport of potted landscaping vegetation. Cold winters reduce these northern populations but enough individuals usually survive to maintain viable populations. Dense populations occur on nearly every dredge spoil island along the Intracoastal Waterway in the Indian River south of Melbourne . Anoles reach these islands by riding on boats or on firewood piles transported on boats by campers . This species thrives in disturbed habitats and ornamental plantings but can potentially inhabit almost any inland or coastal habitat in Florida. It is apparently the most abundant anole over much of the southern half of peninsular Florida.