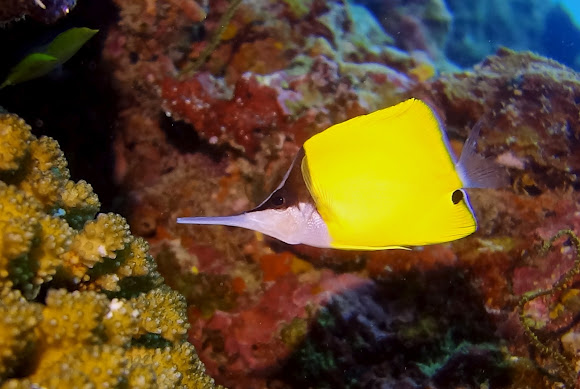 The yellow longnose butterflyfish or forceps butterflyfish, Forcipiger flavissimus, is a species of marine fish in the family Chaetodontidae. It is a small fish which grows up to 22 cm in length. Their longnose gives them the other name, Forcep Fish. The extended mouth gives them the opportunity to hunt among crevices of hard corals for shrimps and crabs as shown in the picture. Being territorial, yellow longnose butterflyfish patrol their patches of coral with a monogamous partner. However, instances of overt aggression among F. flavissimus have been observed between territory holders and individuals of the same sex. Chasing is rare, but when it does occur, males chase males and females chase females. Females defend food resources from other females, while males defend territories containing a female from other males. Territoriality is a favorable strategy for a species to adopt primarily when resources are temporally stable, predictable, and evenly distributed throughout a territory. Territoriality is commonly displayed by benthic-feeding longnose butterflyfish, therefore, because their main dietary resources fulfill these characteristics. Their monogamous pairing appears to be closely linked to their territorial behavior. Although several could cause a species to evolve monogamous behavior, the necessity for biparental care does not applies to longnose butterflyfish because they lay pelagic, or freely floating, eggs. One source of selective pressure responsible for the monogamous pairs observed could be the advantage of territorial defense it provides. Monogamy is favored when a pair makes the defense of one or more resources more efficient than defense by a solitary individual. Longnose Butterflyfish pairs have been confirmed by studies to be heterosexual and pair fidelity has been observed for periods of up to seven or more years.

The yellow longnose butterflyfish is widespread throughout the tropical waters of the Indo-Pacific area from the eastern coast of Africa to Hawaii, Red Sea included, and is also found in the eastern Pacific Ocean from Baja California to the Revillagigedo Islands and the Galapagos