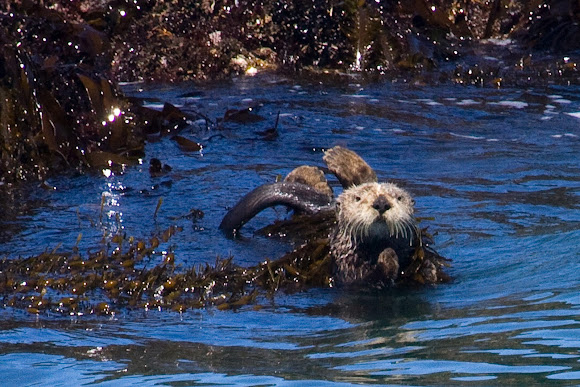 The sea otter (Enhydra lutris) is a marine mammal native to the coasts of the northern and eastern North Pacific Ocean. Adult sea otters typically weigh between 14 and 45 kg (30 and 100 lb), making them the heaviest members of the weasel family, but among the smallest marine mammals. Unlike most marine mammals, the sea otter's primary form of insulation is an exceptionally thick coat of fur, the densest in the animal kingdom. Although it can walk on land, the sea otter lives mostly in the ocean. The sea otter inhabits offshore environments, where it dives to the sea floor to forage. It preys mostly on marine invertebrates such as sea urchins, various molluscs and crustaceans, and some species of fish. Its foraging and eating habits are noteworthy in several respects. First, its use of rocks to dislodge prey and to open shells makes it one of the few mammal species to use tools. In most of its range, it is a keystone species, controlling sea urchin populations which would otherwise inflict extensive damage to kelp forest ecosystems. Its diet includes prey species that are also valued by humans as food, leading to conflicts between sea otters and fisheries. Sea otters, whose numbers were once estimated at 150,000–300,000, were hunted extensively for their fur between 1741 and 1911, and the world population fell to 1,000–2,000 individuals in a fraction of their historic range.[2] A subsequent international ban on hunting, conservation efforts, and reintroduction programs into previously populated areas have contributed to numbers rebounding, and the species now occupies about two-thirds of its former range. The recovery of the sea otter is considered an important success in marine conservation, although populations in the Aleutian Islands and California have recently declined or have plateaued at depressed levels. For these reasons, the sea otter remains classified as an endangered species.

It is very rare to see a Sea Otter north of Monterey Bay like this one, so this spotting was very exciting.