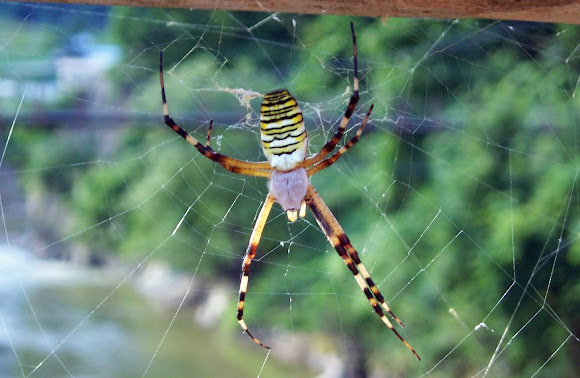 Naga-kogane-gumo (長黄金蜘蛛) in Japanese. Striking yellow and black markings on its abdomen. The adult female is much larger than the male. The male measures between 4 and 6 mm while the female has a full grown size between 14 - 17 mm. When the female is loaded with eggs she can become enormous in size.

I used to see these quite regularly when I lived in Niigata, in rural Japan. I'm not quite how to explain their habitat - they used to station themselves in next to the front door or bedroom window!

These two photos are different spiders, but I assume that they are the same species. The bodies were about one inch long. One thing I noticed was that if their web was disturbed they shook the violently, I assume to ensnare their next meal.

Thanks for the IDs! I lived cheek by jowl with these guys in a very old apartment in the Japanese countryside - never knew what they were called, though!

The both look like Argiope bruennichi to me... in Japanese this spider is called Naga-kogane-gumo. Great spotting!

Here is another site with better photos http://ednieuw.home.xs4all.nl/Spiders/Ar...