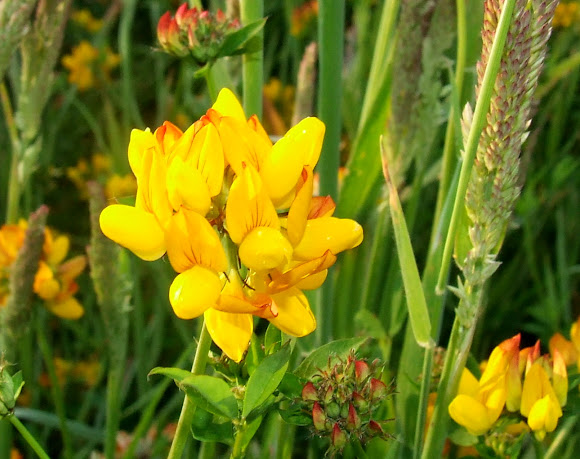 Lotus corniculatus,it is a perennial herbaceous plant, similar in appearance to some clovers. The flowers develop into small pea-like pods or legumes. The name 'bird's foot' refers to the appearance of the seed pods on their stalk. There are five leaflets, but with the central three held conspicuously above the others, hence the use of the name trefoil. The height of the plant is variable, from 5–20 cm, occasionally more where supported by other plants; the stems can reach up to 50 cm long. It is typically sprawling at the height of the surrounding grassland. It can survive fairly close grazing, trampling and mowing. It is most often found in sandy soils. It Flowers from June until September. The plant has had many common English names in Britain, which are now mostly out of use. These names were often connected with the yellow and orange colour of the flowers, e.g. 'butter and eggs'. One name that is still used is Eggs and Bacon

Lotus corniculatus is a common flowering plant native to grassland temperate Eurasia and North Africa. The common name is Bird's-foot Trefoil (or similar, such as "birdsfoot trefoil"), though the common name is often also applied to other members of the genus. It is also known in cultivation in North America as Birdfoot Deervetch.

Uses A cow grazing on birdsfoot trefoil.It is used in agriculture as a forage plant, grown for pasture, hay, and silage. Taller growing cultivars have been developed for this. It may be used as an alternative to alfalfa in poor soils. It has become an invasive species in some regions of North America and Australia. A double flowered variety is grown as an ornamental plant. The plant is an important nectar source for many insects and is also used as a larval food plant by many species of Lepidoptera such as Six-spot Burnet. It is regularly included as a component of wildflower mixes in Europe. Fresh birdsfoot trefoil contains cyanogenic glycosides and is thus poisonous to humans. The plant is one of the few flowers in the language of flowers that has a negative connotation, symbolizing revenge or retribution. spotted in the weet meadow near my house i would like to id it ,of course and i would likre to hsve your opinion on wich photo should i put in first :)

Antonio, I think it's the same species. I also found some flowers nearby with a more reddish color.

Changes maked ,like i told you i spotted rufly 2 months ago :)

Thanks Emma,if it is i think i sp+otted a few times ago in other place and you id it to me ,thanks for one more id :)

Thanks Dan :) Well in that case and coming from you (my first welcome noah comment message,i'll never forget that Dan,it's the kind of thing tha marked a guy:) i closed the votes for the first one :) now the photo opinions are only to the others places :)

I don't know the ID but I do like the second photo best.