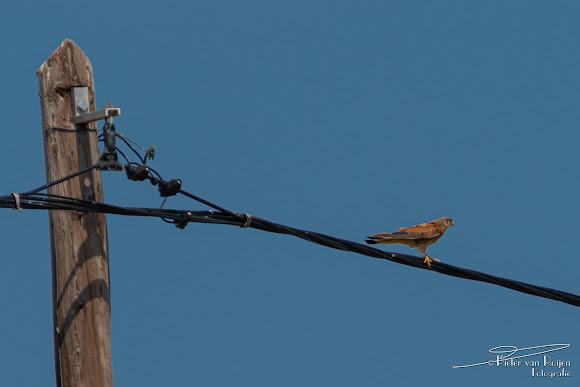 It is a small bird of prey, 27–33 cm (11–13 in) in length with a 63–72 cm (25–28 in) wingspan. It looks very much like the larger common kestrel but has proportionally shorter wings and tail. It shares a brown back and barred grey underparts with the larger species. The male has a grey head and tail like male common kestrels, but lacks the dark spotting on the back, the black malar stripe, and has grey patches in the wings. The female and young birds are slightly paler than their relative, but are so similar that call and structure are better guides than plumage. The call is a diagnostic harsh chay-chay-chay, unlike the common kestrel's kee-kee-kee. Neither sex has dark talons as is usual in falcons; those of this species are a peculiar whitish-horn color. This, however, is only conspicuous when birds are seen at very close range, e.g. in captivity.

This species breeds from the Mediterranean across Afghanistan and Central Asia, to China and Mongolia. It is a summer migrant, wintering in Africa and Pakistan and sometimes even to India and Iraq. It is rare north of its breeding range, and declining in its European range.