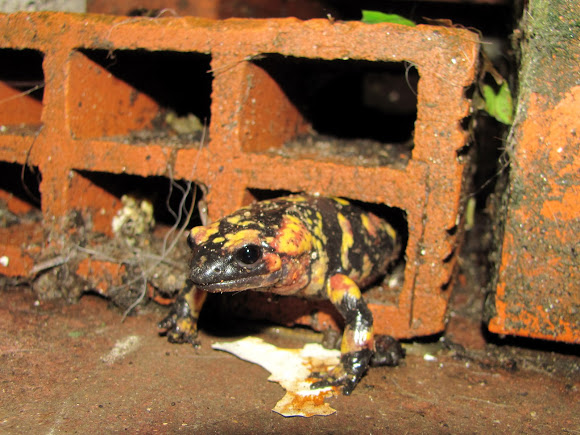 S. s. gallaica have a great deal of dark red colouration on the body, frequently within patches of yellow The fire salamander (Salamandra salamandra) is probably the best-known salamander species in Europe. It is black with yellow spots or stripes to a varying degree; some specimens can be nearly completely black while on others the yellow is dominant. Shades of red and orange may sometimes appear, either replacing or mixing with the yellow according to subspecies. Fire salamanders can have a very long lifespan. A salamander lived for more than 50 years in Museum Koenig, a German natural history museum.

Fire salamanders live in central European forests and are more common in hilly areas. They prefer deciduous forests, since they like to hide in fallen leaves and around mossy tree trunks. They need small brooks or ponds with clean water in their habitat for the development of the larvae. Whether on land or in water, fire salamanders are inconspicuous. They spend much of their time hidden beneath stones, wood or other objects. They are active in the evening and the night, but on rainy days they are active in daytime as well. The diet of the fire salamander consists of various insects, spiders, earthworms and slugs, but they also occasionally eat newts and young frogs. Small prey will be caught within the range of the vomerine teeth or by the posterior half of the tongue, to which the prey adheres. The fire salamander can grow to be 15–25 cm long

Spotted in my Yard,i dont know if is a pragnat lady or a fat guy that haved a extra meal :-)

Thanks Cindy,is the bigest we have spotted in the yard,she showed up again tonigth :-)

Great spotting! This one is large :)