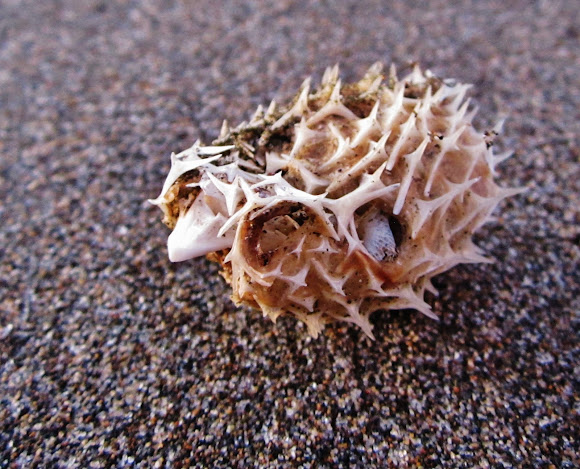 A spiny puffer fish remains washed ashore. Porcupinefish are fishes of the family Diodontidae (order Tetraodontiformes), also commonly called blowfish (and, sometimes, balloonfish and globefish). They are sometimes collectively called pufferfish,[1] not to be confused with the morphologically similar and closely related Tetraodontidae, which are more commonly given this name. Porcupinefish are medium- to large-sized fish, and are found in shallow temperate and tropical seas worldwide. A few species are found much further out from shore, wherein large schools of thousands of individuals can occur. They are generally slow.[2] Porcupinefish have the ability to inflate their bodies by swallowing water or air, thereby becoming rounder. This increase in size (almost double vertically) reduces the range of potential predators to those with much bigger mouths. A second defense mechanism is provided by the sharp spines, which radiate outwards when the fish is inflated. Some species are poisonous, having a tetrodotoxin in their internal organs, such as the ovaries and liver. This neurotoxin is at least 1200 times more potent than cyanide. The poison is produced by several types of bacteria obtained from the fish's diet.[3] As a result of these three defenses, porcupinefish have few predators, although adults are sometimes preyed upon by sharks and killer whales. Juveniles are also preyed on by tuna and dolphins.