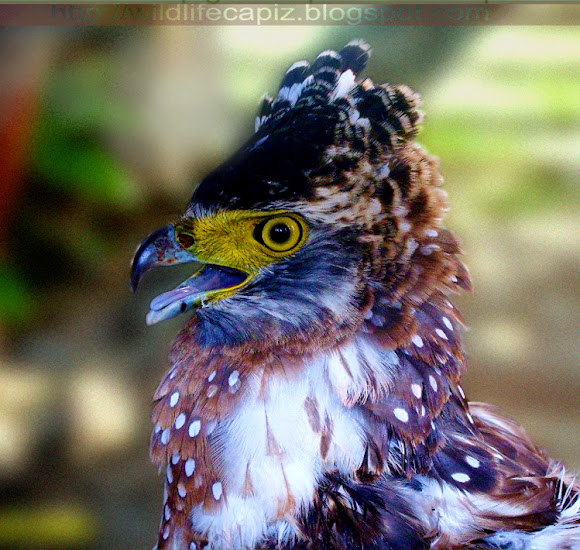 This eagle is endemic to the Philippines and now listed as endangered. This specimen is a male and stands 21 inches. It is distinguished from other serpent eagle species through the prominent spots on the wings and the underpants. It feeds on reptiles, amphibians, small mammals and even birds. One time I saw it caught a toxic cane toad, squeezed it with its talons and splits open the abdomen with its beak and eats only the internal organs. Well he knows that the other parts are toxic - beauty of instinct. It is a solitary and very territorial bird, often seen with company only during the mating season.

This one is actually rescued by my uncle ( a volunteer wildlife rescue ranger ) in exchange of 1000 pieces milkfish fingerlings that cost about 20US$. He has a gunshot wound at the right shoulder and could not fly.We took care of him for more than a year and then released him after he was rehabilitated. At first he kept coming back back to our house after a while, during the mating season he wasn't able to come back. I just hope his fine now. I must admit, in our place, it is far more safer to keep wild animals in captivity than setting them free in the wild where they are often hunted for food or sadly without any reason but by mere pleasure of killing.

Wow, that's a great story and an amazing animal. You are an incredible person... I see BIG things for your future and the future of our planet! You never cease to amaze me :)

yes I am fine with you calling me taj many people do...too bad there's so few of them it's beautiful

Hi! Please consider adding this to the Philippine Endemic Species Mission at: http://www.projectnoah.org/missions/8621...

Thanks taj can I call you taj? I find it more intimate. Actually based on my observation, there no more than 5 of these eagles in our province to the present.