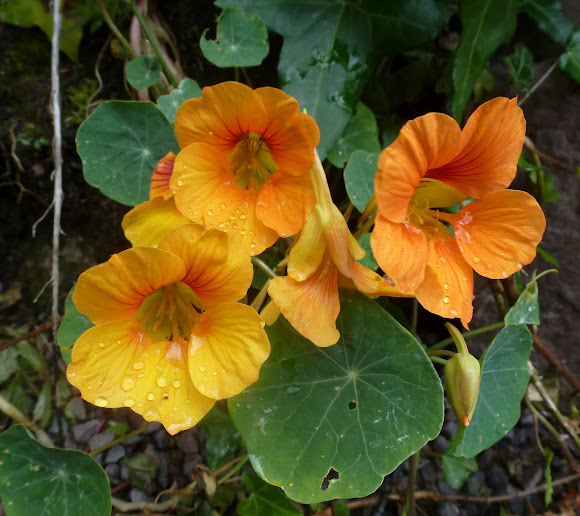 Tropaeolum majus (garden nasturtium, Indian cress or monks cress) is a flowering plant in the family Tropaeolaceae, originating in South America in the Andes from Bolivia north to Colombia. They have showy, often intensely bright flowers, and rounded, peltate (shield-shaped) leaves with the petiole in the centre. The flowers have five petals (sometimes more), a three-carpelled ovary, and a funnel-shaped nectar tube in the back: they vary from yellow to orange to red, frilled and often darker at the base of the petals. The nasturtiums receive their name from the fact that they produce an oil that is similar to that produced by watercress (Nasturtium officinale), from the family Brassicaceae. SOURCE: Wikipedia

Garden nasturtiums are grown for their flowers, and also because both their leaves and flowers are edible; they can be used in salads, imparting a delicately peppery taste. The seeds are also edible, and can be used as a caper substitute. It is widely cultivated, both as an ornamental plant and as a medicinal plant.

thanks Christiane for the ID. Didn't realize nasturtium was related to cress...