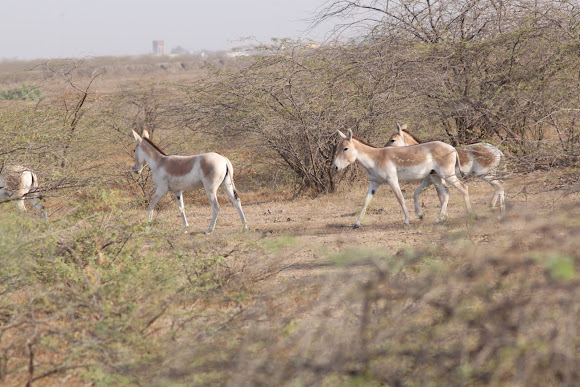 The Indian wild ass, as with most other Asian wild ass subspecies, is quite different from the African wild ass species. The coat is usually sandy, but varies from reddish grey, fawn, to pale chestnut. The animal possesses an erect, dark mane which runs from the back of the head and along the neck. The mane is then followed by a dark brown stripe running along the back, to the root of the tail.

The Indian wild ass's range once extended from western India, southern Pakistan (i.e. provinces of Sindh and Baluchistan), Afghanistan, and south-eastern Iran. Today, its last refuge lies in the Indian Wild Ass Sanctuary, Little Rann of Kutch and its surrounding areas of the Great Rann of Kutch in the Gujarat province of India. The animal, however, is also seen in the districts of Surendranagar, Banaskantha, Mehsana, and other Kutch districts. Saline deserts (rann), arid grasslands and shrublands are its preferred environments.

It is a farley common animal in the rann of kutch