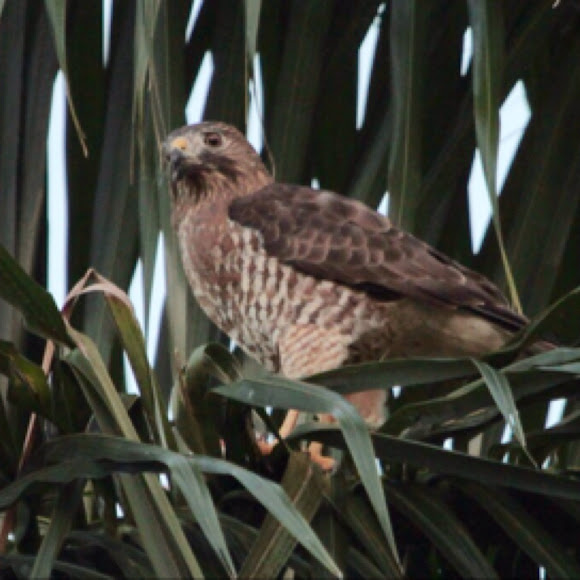 Broad-winged hawks have a wide range in North America and South America, from southern Canada to southern Brazil. Their breeding range is in the northern and eastern parts of North America and some, not all, migrate in the winter to Florida, southern Mexico and northern South America.[9][10] There are five subspecies that are endemic to the Caribbean that do not migrate. Thus, broad-winged hawks are partial migrants.[citation needed] Those subspecies that do migrate will fly in flocks of more than forty up to hundreds of thousands at heights anywhere from 550 m (1,800 ft) to approximately 1,300 m (4,300 ft). They soar using thermals to carry them through their journey of 3,000–6,000 km (1,900–3,700 mi).[11] Fall migration lasts for 70 days as birds migrate about 100 km (62 mi) per day from North America, through Central America to South America without crossing salt water.[12] The enormous flocks of soaring broad-winged hawks are termed kettles and are characteristic of many hawk migration spectacles in North America, such as at Hawk Cliff in Ontario, Hawk Ridge in Minnesota, Hawk Mountain in Pennsylvania, and the River of Raptors in Veracruz. Broad-winged hawks stay in areas up to an elevation of about 2,000 m (6,600 ft). They breed in deciduous forests good for nesting and forage primarily in wetlands and meadows. While some birds have acclimatized themselves to living near humans even those birds avoid human settlements and interactions. In the winter the migrating subspecies of the hawksseek out similar conditions to their overwintering home, so they settle in deciduous and mixed forests.[13]