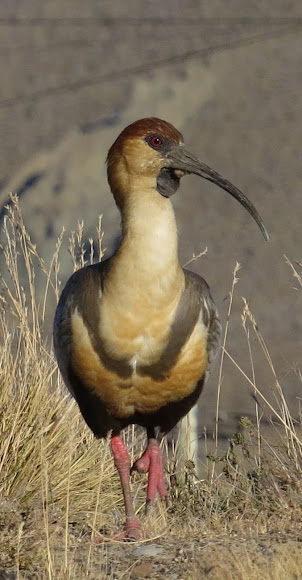 Spotted this beautiful Black-Faced Ibis feeding in the yard of a house near my hotel in El Calafate, Argentina. I also saw ibises when I was in Torres del Paine in Chile. They were typically seen feeding with upland geese and oystercatchers.

The Black-faced Ibis is a large, noisy ibis of temperate grasslands and puna. The Andean subspecies branickii is resident from Ecuador to northern Chile, while subspecies melanopis breeds in southern Chile and southern Argentina but migrates to northern Argentina during the winter. An isolated population of melanopis also occurs in coastal Peru. Both populations have gray upperparts, black bellies, red legs, yellow heads and necks, and long, gray decurved bills. Subspecies melanopis is slightly darker overall with a larger area of black skin visible on the throat. The similar Buff-necked Ibis (Theristicus caudatus) of South American lowlands is distinguished by the large patches of white in its wings. Black-necked generally travels in pairs or small groups that can be seen flying between feeding areas and foraging by walking and probing the ground with their bills. They eat insects, worms, amphibians, and occasionally rodents. Nesting occurs in colonies, sometimes with cormorants (Phalacrocorax sp.) or Black-crowned Night-Herons (Nycticorax nycticorax). The nest is a large pile of sticks or reeds situated on a cliff, on the ground, amongst reeds, or in a tree. Cornell Lab of Ornithology, Neotropical Birds http://neotropical.birds.cornell.edu/por...