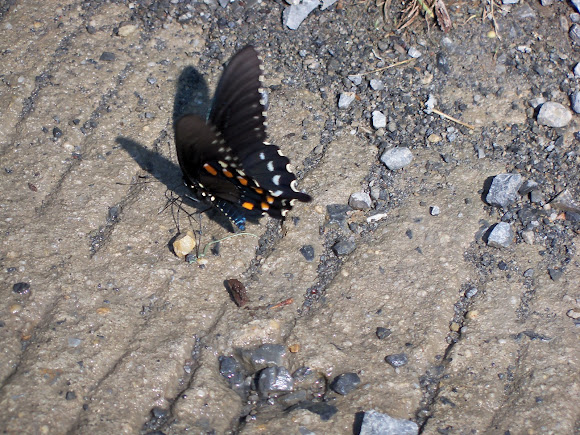 Iridescent blue/black pattern on upper surface is distinctive when fresh. Can be confused with other members of its mimicry complex--see comments below. The Pipevine flutters its wings incessantly while nectaring--I suspect this is part of its mechanisms for advertising distastefulness. (This is original speculation by the author--PC.) Some others in its complex, notably the Black Swallowtail, seem to do this too. Male has very iridescent upper surfaces of hindwings. Female has less striking iridescence. Underside has a single median row of orange spots which do not touch each other.

In eastern US, old fields, etc. near woodlands with hostplant.

This butterfly was flitting around the boat ramp at Hungry Mother State Park in Marion, VA.

Thanks, Keith. Will make the corrections.

Pipevine Swallowtail - Battus philenor. Very similar to the Spicebush Swallowtail, but has only one row of orange spots on the underside of the hindwing.

These are such lovely butterflies!