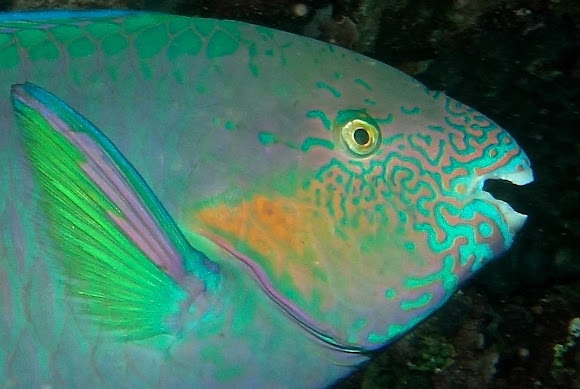 Parrotfishes are a group of about 90 species traditionally regarded as a family (Scaridae), but now often considered a subfamily (Scarinae) of the wrasses. They are found in relatively shallow tropical and subtropical oceans throughout the world, displaying their largest species richness in the Indo-Pacific. They are found in coral reefs, rocky coasts, and seagrass beds, and play a significant role in bioerosion. Parrotfish are named for their dentition, which also is distinct from that of other labrids. Their numerous teeth are arranged in a tightly packed mosaic on the external surface of their jaw bones, forming a parrot-like beak with which they rasp algae from coral and other rocky substrates This Parrotfish is a Medium sized fish, around 40 cm in length. Very colorful. They feed on algae growth on the corals. They used their beak to crunch into hard corals, you can actually hear the crunching when they are feeding. Hard Corals produces calcium carbonate skeletons which is not digested by the Parrotfish and is excreted in a cloud of fine powder. A number of parrotfish species, including the queen parrotfish (Scarus vetula), secrete a mucus cocoon, particularly at night. Prior to going to sleep, some species extrude mucus from their mouths, forming a protective cocoon that envelops the fish, presumably hiding its scent from potential predators. This mucus envelope may also act as an early warning system, allowing the parrotfish to flee when it detects predators such as moray eels disturbing the membrane. The skin itself is covered in another mucous substance which may have antioxidant properties helpful in repairing bodily damage, or repelling parasites, in addition to providing protection from UV light

Tropical reefs especially in the shallows.

At night, the Parrotfishes are not active and likely to be 'sleeping'.
Will try to get pics of that as it is interesting to see them in their mucus cocoon.

Not on night dive, @EnvUnlimited.
Taken on a cloudy day with not so good visibility.
Took the pics on fast shutter speed on Manual setting as the Parrotfishes were moving a lot and I didn't have time to 'wait' since I was guiding a Group of Divers.