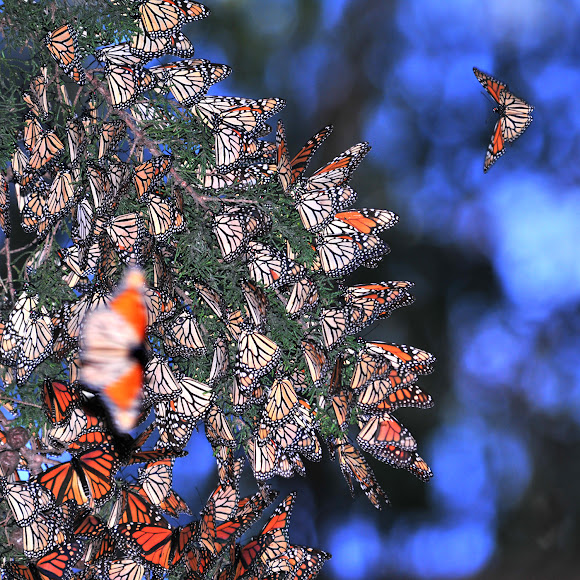 Its wings feature an easily recognizable orange and black pattern, with a wingspan of 8.9–10.2 centimetres (3½–4 in). The upper side of the wings is tawny-orange, the veins and margins are black, and in the margins are two series of small white spots. The fore wings also have a few orange spots near the tip. The underside is similar but the tip of the fore wing and hind wing are yellow-brown instead of tawny-orange and the white spots are larger.

In North America, the Monarch ranges from southern Canada to northern South America. It rarely strays to western Europe (rarely as far as Greece) from being transported by U. S. ships or by flying there if weather and wind conditions are right. It has also been found in Bermuda, Hawaii, the Solomons, New Caledonia, New Zealand, Australia, New Guinea, Ceylon, India, the Azores, and the Canary Islands.

It is perhaps the best known of all North American butterflies. Female Monarchs have darker veins on their wings, and the males have a spot called the "androconium" in the center of each hind wing. The Monarch is famous for its southward migration and northward return in summer from Canada to Mexico and Baja California which spans the life of three to four generations of the butterfly. Monarchs are especially noted for their lengthy annual migration. In North America they make massive southward migrations starting in August until the first frost. A northward migration takes place in the spring. The monarch is the only butterfly that migrates both north and south as the birds do on a regular basis. But no single individual makes the entire round trip. Female monarchs deposit eggs for the next generation during these migrations.

Wow!! This is amazing! I could only dream of seeing so many monarches in one place. We are waiting for them to arrive here in Maine. :D

Great spotting! Would make a great addition to the Monarch Migration Mission if you would like to join http://www.projectnoah.org/missions/8100....