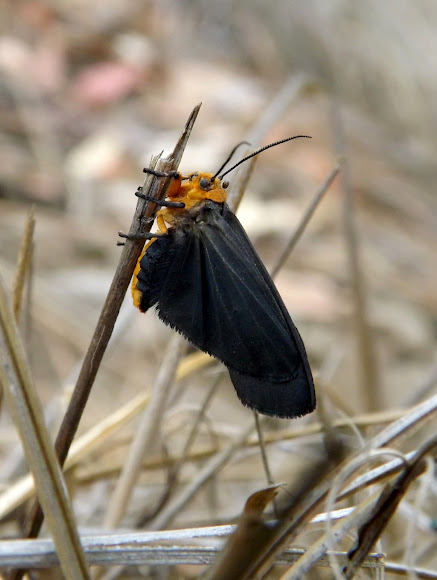 The male G. ventralis moth is displayed here to have a predominantly black body except for the bottom of the abdomen and the head area -- save for the eyes -- which are an orange color. Its two antennae are marked by miniature teeth-like structures. Quite typical of a moth, it was resting with its wings closed, and wasn't even concerned about my slowly approaching behemoth of a camera lens. Update: finally figured out the species -- it is indeed Gnamptonychia ventralis, except we did not know that it was a male until the folks at Bug Guide set me straight. Males have an orange underside and black on top of the abdomen, whereas the females have the abdomen tip orange while the rest of its body, aside from the head (not including the eyes), is black.

Preferring lower altitudes of no less than 6,000 feet, and not too widespread; only two were spotted throughout the whole mountain-range and for the duration of the 10-hour hike. Thanks to the Butterflies and Moths of North America page, it is known that they only have been sighted in the southeastern Arizona mountains and one lone stray spot in central Texas.

From abdomen to head, it is under 4 centimeters. Found exactly at 7:15 AM. Compare with a female's coloration here: http://www.lepbarcoding.org/northamerica... The first thing I thought of when I saw this moth was "Halloween come early?" :)

That's exactly what I was thinking jgorneau! Ah but now it all makes perfect sense. And definitely gatorfellows, that has proven thanks to this spotting that gender makes an absolute difference.

Now we know and can add gender to our future criteria. Thanks.

That is hilarious! I am glad the mistake was not as huge as we were thinking! :)

Looks like the folks at Bug Guide had it right after all; we were just comparing this find (which I now know is male) to a female Gnamptonychia ventralis. The males have the coloration displayed here, while the females have an orange-tipped abdomen and the rest of the body -- minus the head -- is black. We were just confused over a simple gender difference!

I was viewing photos of that genus and you're right, their bodies are rather slender and low to the ground compared with this one. It was no larger than 4 centimeters, perhaps it was 3. Thank you for your input! I will submit this also to the suggested group ASAP.

I agree; and it seems we have a bit more searching and learning. This is another fun part of Project Noah. I to say thanks Christine for your eyes and comments. It certainly helped clarify our thoughts. Will keep looking.

I must say, I have never heard of a Ctenucha moth with such a stout body, and really do not think this is the ID. How large was the moth? This may help with further identification.

I would try submitting this species also to: http://mothphotographersgroup.msstate.ed...

They are often quite a reliable resource.

To gatorfellows: I think we've all learned just a bit more from this spotting, which is always a welcome side-effect. :)
Thank you for the pictures and especially for locating one in a ventral view! But what Christine mentioned is exactly what I was suspecting...

To Christine: Thank you for the kind words, I had to have lots of patience snapping shots of this guy. :)
What you mentioned about this new candidate G. ventralis is what I was starting to note and observe; that species has the tip (top and bottom) colored orange and it eventually ends before reaching the orange head, but in this spotting, as you've mentioned, it appears that the underside is all orange while the top black. I'm comfortable with the genus identification at least though, thank you!

Hi there! Great pics! Black can be difficult to catch detail on!

I don't think any of the three suggested candidates are correct. The Cisseps fulvicollis should have an all-black body. Atolmis rubricollis displays with the wrong type of antennae and also has fully black legs (the thorax is black). The orange tail tip on the Gnamptonychia ventralis is fully visible from above for some distance, and in your picture, it looks like the orange coloration is only on the underside of the moth's abdomen. It's also not a Grapeleaf Skeletonizer (Harrisina americana), as those are fully black except for the orange on their heads.

I'm sorry I can't provide an exact i.d. for you, but I can say that the body, antenna and wing shapes do match the Ctenucha family which is the family of wasp mimics. Here's the Wikipage for them. http://en.wikipedia.org/wiki/Ctenucha

Hi again; just found a page with 5 pined specimens for Gnamptonychia ventralis, one is a side view that aligns to what you are seeing in your photo, so check it out:
http://www.lepbarcoding.org/northamerica...

Yes the Gnamptonychia ventralis certainly is a good candidate. Since the only photos I too could find were pinned specimens dorsal (top) views I understand how it is hard for you to compare to your live moth. It is a closer match than what I suggested (Yellow-collared Scape). I will keep my eye out for the ventral (bottom) view of a pinned specimen, or a photo that is a good comparison for you. Sort out the orange tail of the suggested specimen or the orange belly in your photo. You can always go back and edit. I have done that as I narrowed my ID. You have helped me learn with this spotting. Great job and thanks.

An ID was suggested almost immediately from BugGuide: they think Gnamptonychia ventralis might be a likely candidate. I feel that might well be it, but given that there are few photos and descriptions of this moth online, I'd feel more sure if a bug expert would give me his or her two cents on the matter!

Here's one of those few photos found online: http://nitro.biosci.arizona.edu/zeeb/but...

Ahh okay that makes it very clear. And yes, this guy does have the hairy antennae going on and would not open its wings for a second while resting. Thank you for all that information, it really does help. :)

Some moths have antennae that are dry nondescript, looking just like straight lines or sometimes horns. My general indicator is the antennae, either clubbed for butterflies, and feathery or nondescript for moths. Anther indicator is that moths rest with their wings resting, while butterfly's tend to have a compulsion to move their wings, even at rest. Butterflies are harder to notice the scales that make up the "dust" on the wings, while they are quite visible in moths. Hope this helps, and well put, gatorfellowa!

Moths can be very colorful.
Here is my shortcut to ID moths with Bugguide.net
http://bugguide.net/node/view/170304

The simplest way is the antennae. Butterflies have antenna that end in small clubs - like a drummer's drumstick. Moths, because they fly mostly at night have feathery or more elaborate antenna. There are terms for the various kinds of antenna structures. The other differences are moths are usually fuzzier, must stay warmer to fly at night. Good luck with your spotting and submitting to Bugguide.net is a good idea. I use them as a reference to find insects all the time.

Oh and a question -- so how do you determine that it's a moth or butterfly? It might be a misconception, but I associate color with a butterfly and absence of color with moths, i.e. bright blue, green, red, etc is a butterfly while grays and black belong to a moth.

I still value the input gatorfellows, thank you! In the future, I'll try to get more shots from various angles. At this point, I'm still trying to figure out my new camera, and I'm just thankful that from the 20-something shots I took, at least one came up clear.

I think it is a similar, but definitely not the same species. In your spotting, observe the absence of an iridescent blue-green body. I think your best bet would to submit it to BugGuide, and see what they think.

Could you also add this to my mission, Moths of the Americas (http://www.projectnoah.org/missions/8841... Thanks!

The yellow collared Scape Moth has a black abdomen. I cannot tell by the photo is yours has a black abdomen or if it is orange. If orange the suggestion may be incorrect. Not sure about Arizona species. Hope this helps narrow the search.

gatorfellows, that suggestion does look like it could be it. But I see two things that aren't allowing me to fully accept C. fulvicollis; on a distribution map, they don't occur in southeast Arizona, and the head area once again looks different on this one. I think it might be of the same genus though, what do you think?

It is really close to the one I've found, but just slightly different near the head area. This one is more orange and the black is only on the eyes, while yours is mostly black. But with a bit of research, I might find something, thanks Lars!

Here's a similar one - maybe it helps
http://www.projectnoah.org/spottings/112...