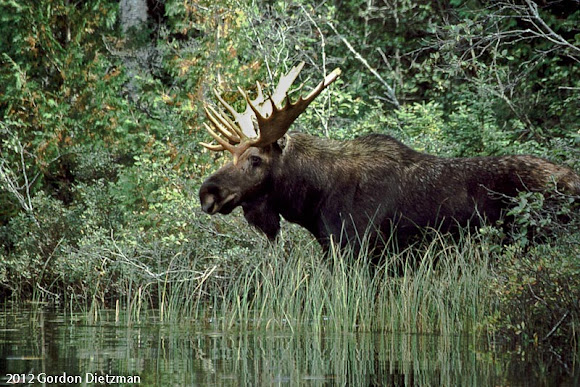 Moose are the largest living deer. Alaskan bulls may weigh up to 1600 pounds with cows being smaller. They typically are dark brown or black with lighter colored legs. European Elk (moose) typically are slightly smaller and darker. Bulls have large palmated antlers. The photo above is of the "andersoni" subspecies, which is the second largest of the North American subspecies. This particular subspecies ranges across much of western Ontario, Minnesota, and westward to British Columbia.

Moose live in a variety of habitat ranging from deciduous and boreal forests, river bottoms, and have been expanding their range into regions dominated by shrubby tundra. They live in a wide swath across the northern hemisphere.

This is a photo I took back in 2001 while on a wilderness canoe trip in Minnesota's Boundary Waters Canoe Area Wilderness. We had been camping on one of my favorite lakes--Malberg Lake--and decided to head to a tiny lake we spotted on our maps called Bow Lake. Presumably there was a portage (path) from the Kawishiwi River into Bow Lake, but if there was it wasn't well-used and had overgrown, so we simply pushed our canoes through the trees and alders until we came to the lake. It was gorgeous and made even more special by the arrival of this bull moose. I should mention that this photo is scanned from a 35mm slide so the quality isn't the best. Still, I have very fond memories of this day.

Thanks Antonio for your kind words. It was certainly a highlight of that trip.

Thanks Gerardo. This particular canoe trip took us back into the wilderness on a six day trip. I try to get up to the Boundary Waters at least once a year; it's a peaceful place with quite a bit of wildlife. Unfortunately the Minnesota moose population is disappearing rapidly--although it was once common here--and we may not see this animal for much longer in the Boundary Waters. When I first started going to the BW some 20 years ago, we would typically see at least one of these magnificent animals; some trips as many as 5 or 6. Now we rarely see them and I haven't seen one now in several years.

Thanks everyone. It was a great experience.