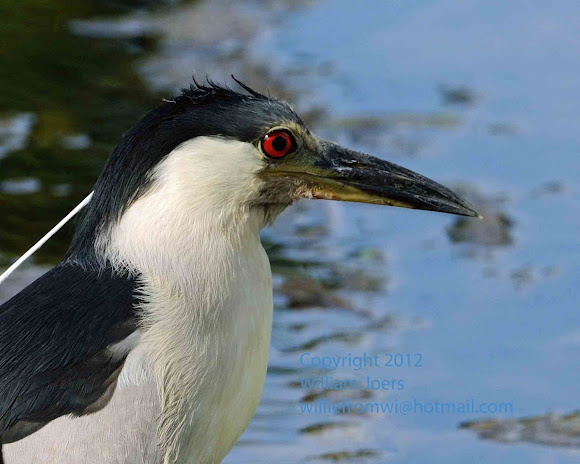 Adults Black-crowned night heron are approximately 64 cm (25 in) long and weigh 800 g (28 oz). They have a black crown and back with the remainder of the body white or grey, red eyes, and short yellow legs. They have pale grey wings and white under parts. Two or three long white plumes, erected in greeting and courtship displays, extend from the back of the head. The sexes are similar in appearance although the males are slightly larger. Black-crowned Night Herons do not fit the typical body form of the heron family. They are relatively stocky and about 25 in tall (63 cm) with shorter bills, legs, and necks than their more familiar cousins the egrets and "day" herons.

The black-crowned night-heron breeds on every continent except Australia and Antarctica. They are one of the most common herons in the northern United States, breeding everywhere except the southwest and Rocky Mountain states. They are found in many types of wetland habitats including riparian forests, wooded swamps, marshes, mangroves, and even occasionally grasslands or rice fields.

This spotting was made while in Dallas, I had about 18 hours over the course of three days to look for and try to photograph wildlife. I had no idea where to really begin to look, but went on instinct, to make this capture. It was photographed less then 3 miles from my hotel. Sometimes knowing a bit about wildlife comes in handy when your in a new area, it certainly paid off for me on this trip.

Thanks rjarman79, Maria dB. Gerardo, Donna's photo is very much like mine.

Is amazing the similitude in the behavior:):)

Gerardo, when I saw her photo, it made me go look for mine, and I realized I had put it up on facebook, but not on Project Noah. I just had to put mine up there to show Donna, I caught a bird in a similar pose.

Thanks Donna, I had thought I had put this spotting up on Project Noah, but I realized I had only put it up on my facebook page. I saw your photo and went looking for mine and realized I had never put it up here. I put the shot similar to yours in the forth position so yours and mine are in the same spot should anyone read this and wish to go look at your fun capture too. I wish I had had my shutter speed set a bit higher when he did that.

Oh wow the 3 photo is so similar to Donna´s great series Willie:)

Great series. You caught just as silly a pose with your bird as I did with mine.