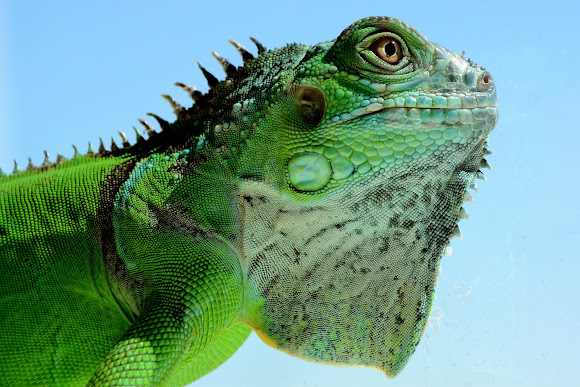 The Green Iguana or Common Iguana (Iguana iguana) is a large, arboreal herbivorous species of lizard of the genus Iguana native to Central, South America, and the Caribbean. The green iguana ranges over a large geographic area, from southern Brazil and Paraguay as far north as Mexico and the Caribbean Islands especially in Puerto Rico where they are also known as "Gallina de palo" and they are very common throughout the island and often eaten; and in the United States as feral populations in South Florida (including the Florida Keys), Hawaii, and the Rio Grande Valley of Texas. A herbivore, it has adapted significantly with regard to locomotion and osmoregulation as a result of its diet. It grows to 1.5 metres (4.9 ft) in length from head to tail, although a few specimens have grown more than 2 metres (6.6 ft) with bodyweights upward of 20 pounds (9.1 kg). Commonly found in captivity as a pet due to its calm disposition and bright colors, it can be demanding to care for properly. Space requirements and the need for special lighting and heat can prove challenging to an amateur hobbyist. (Description from Wikipedia)

Congratulations Michael it is a beautiful iguana and a lovely picture; the brightness and clearness of its skin's details are quite amazing. =)

Great shot! So clear and sharp which show great details.

Thanks everyone! I'm excited to be chosen for the SOTD!

What a fantastic photo and animal. Congratulations! You certainly deserve SOTD!

great details! congratulations on your SOTD..!

Congrats Michael, your photo was chosen as spotting of the day!

"The incredible Green Iguana in today's spotting of the day was recently spotted in the tropical rainforests of northern Guatemala. Did you know Green Iguanas are vegetarians? As herbivores, they eat mostly the leaves of plants. On occasion they will eat the flowers, stems, or fruit on the plant."

I agree with williefromwi, who was first =)

Let me be the first to say, this is one very sharp and beautiful capture