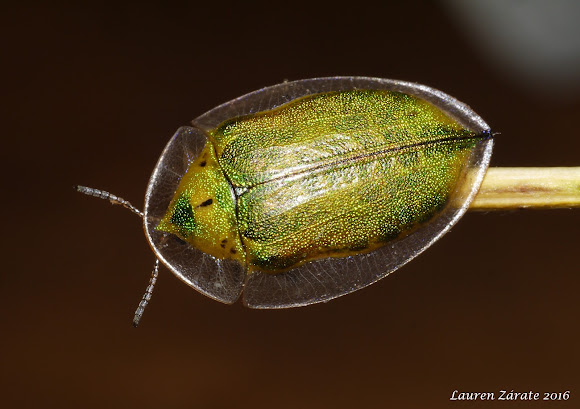 Marked color change in an adult beetle is almost never observed. Following the teneral stage, adult beetles remain the same throughout the rest of their lives (with the obvious exception of scale or hair loss in beetles with those characteristics). Tortoise Shell Leaf Beetles are neither hairy nor have scales. Species of the genus Physonota however, do change color dramatically, from a mottled black and white bird dropping-like color phase to a metallic green color phase. This beetle was found in its mottled color phase on the 12th of July 2016 (see spotting http://www.projectnoah.org/spottings/101...). It was kept in a clean dry clear container with a paper substrate (without food since I never found the host plant) for several weeks to document the change in color. The above pictures show: 2) the same beetle at collection (12 July 16); 3) 8 days later (20 July 16); 4) 14 days later (25July 16); 5) 22 days later (3 August 16) and finally 6) 36 days later (17 August 16) at its final metallic green phase. The color change was gradual over a 5 week period and was not related to feeding on leaves or other external stimuli. This color change has been reported previously (http://www.jstor.org/stable/3999574?seq=...) but not previously documented by observation of a single individual.

Thank you Sukanya! Me too! It must cause a lot of taxonomic mix ups!

Super observations...I would have thought these were ALL different species.

Thank you Torsten :) I read about the color change when I was looking for the ID of this beetle. I couldn't believe my eyes when it actually occurred! I was dubious that it would really change like that! Very neat.