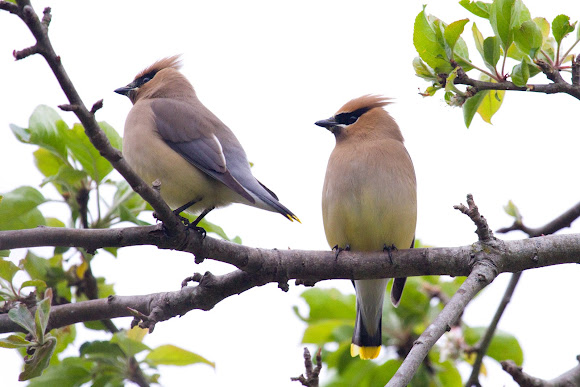 The Cedar Waxwing (Bombycilla cedrorum) is a member of the family Bombycillidae or waxwing family of passerine birds. It breeds in open wooded areas in North America, principally southern Canada and the northern United States. Cedar waxwings are approximately 6–7 in (15–18 cm) long and weigh roughly 30 grams. They are smaller and more brown than their close relative, the Bohemian Waxwing (which breeds farther to the north and west). These birds' most prominent feature is a small cluster of bright red feathers on the wings, a feature they share with the Bohemian Waxwing (but not the Japanese Waxwing). The tail is typically yellow or orange depending on diet. Birds that have fed on berries of introduced Eurasian honeysuckles while growing tail feathers will have darker orange-tipped tail-feathers. Adults have a pale yellow belly. Immature birds are streaked on the throat and flanks, and often do not have the black mask of the adults. During courtship the male and female will sit together and pass small objects back and forth, such as flower petals or an insect. Mating pairs will sometimes rub their beaks together affectionately.

I finally had a chance to see the red droplets on the wings which gives them the name" Wax Wings" These are gorgeous birds. I am thankful to Ava for suggesting that they like Toyon berries. That is how I spotted them!

We had an amazing spring for waxwings and saw more of these birds over the space of a few weeks, than we have ever seen before.

Very nice. Mine are long gone now too, but they will come through again to get the berries on my trees and shrubs.

The waxwings have moved on north. These photos were taken in late May.

I am surprised that they are still around!