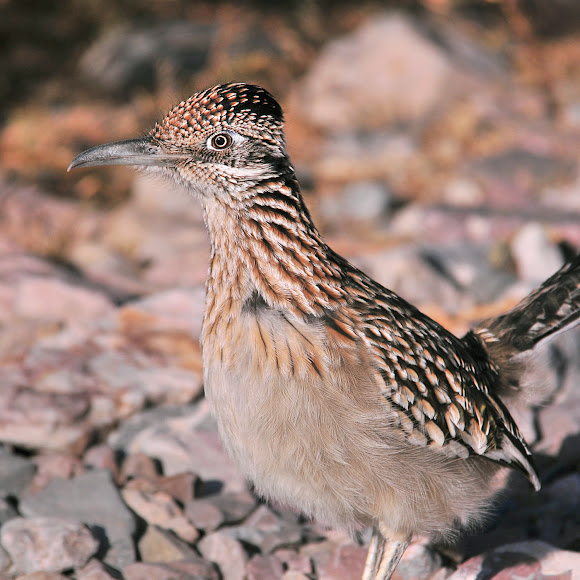 Found in open arid and semiarid country with scattered brush.

The Greater Roadrunner can reach running speeds of 30 km/hr (18.6 mi/hr). It holds its head and tail flat and parallel to the ground when running at its top speed. To warm up after a cold desert night, a roadrunner will turn its back to the sun, fluff its back feathers, and expose skin along its back. This skin is black in order to absorb more solar energy. The Greater Roadrunner eats many venomous prey items, including scorpions, spiders, and rattlesnakes. Two birds may cooperate to kill a large snake. The Greater Roadrunner is an opportunistic forager. It frequently captures small birds at bird feeders and nest boxes. One was observed to leap up from hiding in a dry riverbed and knock down a low-flying White-throated Swift. The desert-dwelling roadrunner uses salt glands in front of its eyes to excrete excess salt from its blood. Such glands are common in ocean-going birds that can drink seawater. The roadrunner is able to get along without drinking water if it eats food with high enough water content, but it will drink readily if water is available.