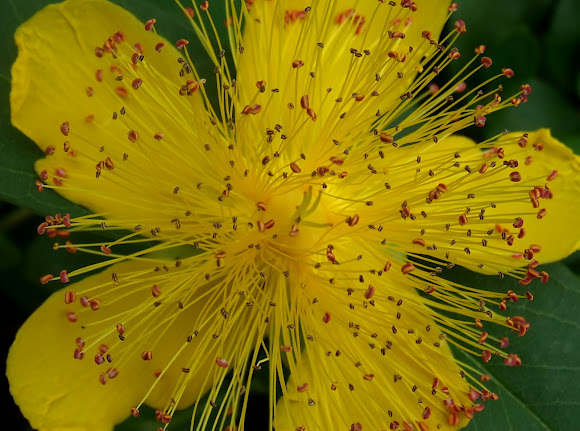 Scientific classification Kingdom: Plantae (unranked): Angiosperms (unranked): Eudicots (unranked): Rosids Order: Malpighiales Family: Hypericaceae Genus: Hypericum Species: H. calycinum Binomial name Hypericum calycinum It is a low, creeping, woody shrub to about 1 m tall and 1–2 m wide but often smaller. The green, ovate leaves grow in opposite pairs. The solitary flowers are 3–5 cm in diameter, a rich yellow, with five petals and numerous yellow stamens. It is indigenous to southeast Europe and southwest Asia. It is a popular, semi-evergreen garden shrub with many named cultivars and hybrids derived from it. In North America the name Rose of Sharon is applied to a species in a different order, Hibiscus syriacus. This species is capable of producing the medicinally active components of H. perforatum (hyperforin etc.), though in different ratios, with adhyperforin predominating, and a low level of hyperforin present.

Hypericum calycinum is a prostrate or low-growing shrub species of the genus Hypericum (Hypericaceae). Widely cultivated for its large yellow flowers, its names as a garden plant include Rose of Sharon in Britain and Australia, and Aaron's beard, Great St-John's wort, and Jerusalem star. Grown in Mediterranean climates, widely spread in the Strandja Mountains along the Bulgarian and Turkish Black Sea coast

Thanks Emma and Gatorfellows,for the id

I agree it does have the look of St Jonh's Wort, Hypericum calycinum