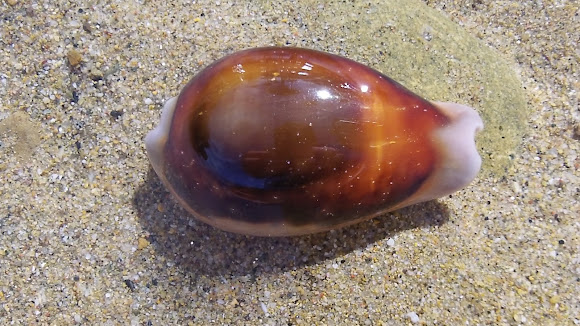 From Wikipedia: This species is a subtropical cowry which occurs in the Eastern Pacific Ocean. It is relatively common in Southern California. It does occur from Monterey, California, through Southern California, and south to Cedros Island, in Baja California, Mexico, but north of Santa Barbara, California, it is not often found. The adult shell of this species ranges in size from 40 to 65 mm. The name "chestnut cowry" come from a large patch of a rich chestnut brown on the dorsum of the shell, ringed with a darker brown, against a white background.

From Wikipedia: This species lives on exposed rocky shores in the very low intertidal and subtidal zones. It is found on overhanging rock ledges and on other somewhat sheltered rock surfaces.

Would you mind removing your shell photos from the Osteology Mission? Osteology is actually the study of vertebrate bones. It's a detailed study of the structure of bones, the skeletal elements, teeth, morphology, function and disease. Osteology aids in identifying vertebrate remains with regard to age, death, sex, growth, and development. From what I understand is shells are actually exoskeletons created by marine mollusks. Thank you for your understanding! :)