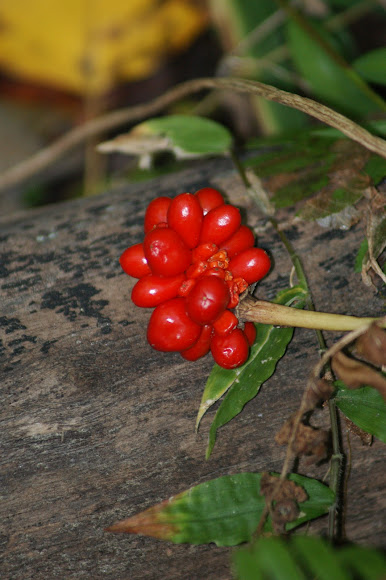 This is the fruit of Jack-in-the-pulpit. The fruits ripen in late summer and fall, turning a bright red color before the plants go dormant. Each berry produces 1 to 5 seeds typically, the seeds are white to light tan in color, rounded, often with flattened edges and a short sharp point at the top and a rounded bottom surface. If the seeds are freed from the berry they will germinate the next spring, producing a plant with a single rounded leaf. Seedlings need three or more years of growth before they become large enough to flower.

It occurs in moist woodlands and thickets from Nova Scotia west to Minnesota, and south to southern Florida and Texas. This plant was growing near Cliatt Creek at Mistletoe State Park in near Appling (Columbia County), GA.

Other common names for this plant include bog onion, brown dragon, Indian turnip, American wake robin, or wild turnip. Plants in early spring before the leaves have fully unfolded The plant contains calcium oxalate crystals as raphides in all parts, and because of this consumption of the raw plant material results in a powerful burning sensation. It can cause irritation of the mouth and digestive system, and on rare occasions the swelling of the mouth and throat may be severe enough to affect breathing. If the plant is properly dried or cooked it can be eaten as a root vegetable. A preparation of the root was reported to have been used by Native Americans as a treatment for sore eyes. Preparations were also made to treat rheumatism, bronchitis, and snakebites, as well as to induce sterility. The oxalic acid in jack-in-the-pulpit is poisonous if ingested. Care should also be taken to avoid confusion with poison ivy, which has three leaflets somewhat similar in appearance.