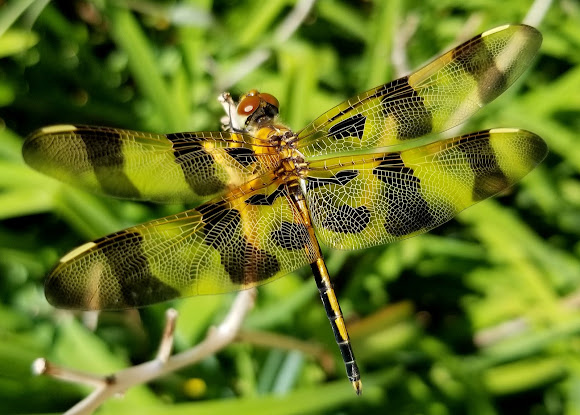 It is a medium sized dragonfly in the family Libellulidae. The dragonfly has a yellow sheen to the wings with many black and brown stripes. The thorax is yellow and 1 inch long. The head has two big red eyes. The abdomen is black with a yellow stripe in the middle. The wingspan is 40 mm. long. The veins of dragonflies are more complex than lepidoptera and diptera. They have many veins that make up many boxes.

It is native to eastern North America, including Ontario in Canada and the United States as far west as Colorado. The dragonfly was a rather small male that was much smaller than most females I have ever seen. It ranges as far north as southern Canada and as far west as the United States east of the Rocky Mountains. It lives in wet habitat types such as ponds, marshes and lakes, where it perches on vegetation. Near by there are no creeks or ponds so it might just be basking in the morning sun.