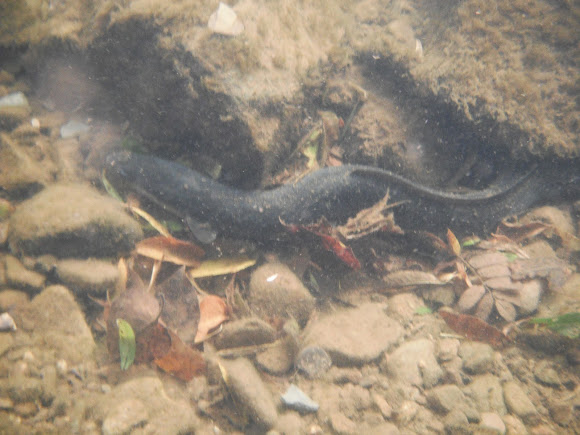 The American eel, Anguilla rostrata, is a catadromous fish found on the eastern coast of North America. The American eel has a slender snakelike body that is covered with a mucous layer, which makes the eel appear to be naked and slimy despite the presence of minute scales. A long and dorsal fin runs from the middle of the back and is continuous with a similar ventral fin. Pelvic fins are absent, and relatively small pectoral fin can be found near the midline, followed the head and gill-covers. Variations exist in coloration, from olive green, brown shading to greenish-yellow and light gray or white on the belly. Eels from clear water are lighter than those from dark, tannic acid streams

The eel lives in fresh water and only leaves this habitat to enter the Atlantic ocean for spawning. It takes 9 to 10 weeks for the eggs to hatch. After hatching, young eels move toward North America and enter freshwater systems to mature. The female can lay up to 4 million buoyant eggs a year, but dies after egg-laying. The eel is found around the Atlantic coast including Chesapeake Bay and the Hudson River. It prefers to hunt at night, and during the day it hides in mud, sand or gravel very close to shore, roughly 5 to 6 feet under.

The eels spawn in the Sargasso Sea and the larvae (also know as glass eels) are carried up the coast by the Gulf stream. Sorry about the quality, I was using an underwater camera but the river was pretty murky.