Hawk and rabbit tracks in snow 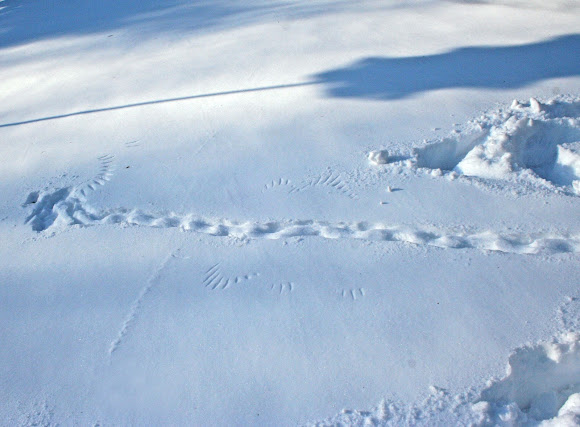 A hawk pursued a rabbit through the snow, striking and missing several times, but eventually catching it. The hawk covered its prey at the kill spot, then flew away with it. You can see the faint wing feather imprints over the line of rabbit tracks where the hawk missed, then the deep pit in the snow and heavy wing imprints where the hawk caught and covered its prey. We didn't see the hunt, only the tracks in the snow. Based on animals seen in the yard at other times and knowing the hunting style of different raptors, the hawk was probably a Cooper's Hawk (Accipiter cooperi) and the rabbit was probably an Eastern Cottontail (Sylvilagus floridanus).

My brother, a police officer, processed the yard like a "crime scene," following the tracks and taking photos. I'm posting the photos with his permission.

Awesome spot Abigail! Definitely a good one for Signs of Wildlife, & you could also add it to the Hunters & Animal Food Habits mission.